Doctor Who - Series 10 in a Nutshell 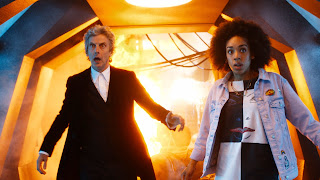 Marc Nash goes back in time and regenerates his thoughts for the whole of Series 10 of Doctor Who (with spoilers if you missed any episodes)...

I’m 53 years old you know! Usually in social situations, such declamations are regarded as a jokey mitigation for eccentric or out of touch views. However, it used to be in the world of Doctor Who that such claims conferred you with the reverence of an elder, that you may have indeed witnessed the original Mondas Cybermen, or viewed William Hartnell do battle with something that looked to have have been filched from “Blue Peter’s” studios, chockful of sticky-back plastic as the monster was. We got a throwback to that in this series finale episode, of the original 1960s Cybermen justified as primitive technology here, while heck, there was even an appearance from Hartnell himself, only of course long in his grave this was actor David Bradley appearing in his stead.

I’m 53 years old, but then you know that already. Ever since the reboot under the inestimable hand of Russell T Davies put me back in touch with one of only two vestiges of my childhood I’ve retained into my middle-aged dotage, (the other being patronage of my football team), each new series of Doctor Who has seen my brain’s engrams overwrite whatever sentimental emotions the show conjured up of the child me. Each year under the less than estimable tiller hand of Steven Moffat, I asked myself will I even bother watching the next series? I think I have finally reached the point of ‘no’. We’d had a year’s fallow period before this Series 10 returned to our screens supposedly refreshed, with new travel companion Bill Potts, but the lamentably lame sidekick Nardole; Matt Lucas mumbles all his supposed witticisms so we miss most of them without recourse to an ear trumpet pressed to the TV screen (I don’t have HD you know, I’m 53). Nardole cannot hold a candle to Drax for humour and I really can’t see the point of his existence in the show. Pearl Mackie does a reasonable job as Bill Potts, though sometimes, such as in the final episode, she does lapse into Mockney English. Also for a companion, she is pitched even more unfeasibly swiftly into the moral dilemmas of being the Doctor’s Companion, (Billie Piper had two series before confronting the planet-saving-sized decisions, Bill takes just 7 episodes), while she ends up converted into a Cyberman and seemingly unrecoverable by the end of her maiden series voyaging. Even this is a recycling of the treatment of Jenna Coleman’s first appearance as a human-become Dalek, but fighting damn hard to preserve the human side. Bill’s ‘cure’ seems to be that of the drippy (literally and metaphorically) fate of her friend-cum-proto-love-interest Heather fro the first episode. Maybe her Xmas Special present from Santa will be the gift of desiccation. I don’t know, I won’t be tuning in. 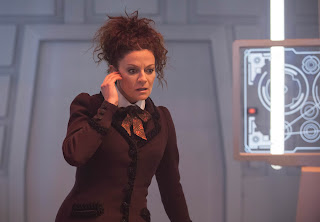 Okay, so to the series as a whole. I had high hopes. We knew Missy, my favourite character of recent times, would be appearing. We were even privileged a glimpse of John Simm’s return in the pre-series hype. Augured well, although pretty quickly I’d guessed it was Missy in the vault and that’s never a good thing for the audience to be ahead of the game. Episode 1 - “The Pilot” introduced us to an earthbound Doctor, partly to guard the vault but also seemingly a commitment to pay some sort of penance for getting his companions killed by ceasing to venture forth and requiring someone to accompany his loneliness (clearly Nardole could never fulfil that function). Bill Potts is introduced as a functionary deep frying chips on the campus the Doctor is laughingly tenured at and she is- gasp - gay. I am genuinely curious how that will play over in the US, but I suppose the religious Right there all eschew Doctor Who as the work of the devil anyway. But the few swapped kisses and handholding throughout the series only put me in mind of that highly spotlit first televised lesbian kiss on “Brookside” all those years ago. Scenes that are fully cognisant of their pushing through self-imposed barriers, with a flagrant condescension to who they imagine their audience to be. With all this backstory to cram in, hardly surprising that the ‘monster’ plot part was resolved speedily, another lost fighter/lover/pilot of the same order as series 8 episodes “The Caretaker” and “Mummy On The Orient Express”. Tired, tired, tired and yes, rather drippy.

The next two episodes passed me by with no more involvement. “Smile” offered the discomforting notion of revealing an ossuary of human bones of the dead, but reined it back for family viewing by stupid smiley faced robots who looked as though they should have been holding out trays of ecstasy tablets at a futuristic rave. “Thin Ice” was yet another creature lurks under the Thames at some point in London’s history. Not even Nathan Barley (actor Nicholas Burns) as a nefarious Victorian entrepreneur could redeem this episode, not helped by his unfortunate cherubic cheeks forever suggestive of a smug grin plastered across his face. Now had they found a part for Chris Morris I might have sat up and paid obeisance… Episode 4 “Knock Knock” sees Bill move in with some student mates into a house so haunted it eats its tenants. Nothing you haven’t seen in dumb Hollywood teen movies and equally as popcorn-disposable. I shall refrain from gags about wooden acting, but David Suchet as the villainous landlord gurns for all he’s worth through the part. Halfway point episode “Oxygen”, is zombie spacesuits because there is a problem with the oxygen to feed them. I think this is a two-minute critique of unfeeling capitalism and the human cost of naked pursuit of profit, but you cannot pull it off so tritely. (This was the genius of Russell T, he gave proper consideration to the social critiques he wanted to make, something that forever remains beyond Moffat). The Doctor sacrifices himself for Bill to have oxygen and exposed to the vacuum of space his eyes pop and he goes blind. And that one fact may be the lone interesting feature to carry through to the second half of the series, because the first half was completely forgettable. 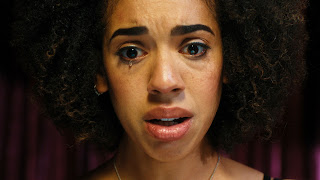 And finally the non-shock reveal of the vault. The opening scene to how Missy ended up there is well done, a reasonably gripping ritualistic march up to the execution scaffold for her, with the Doctor charged with being the executioner. But then we are returned to real time and the Da Vinci Code meets “The Matrix” as the world is revealed to be a simulation, which is why the Doctor’s bodge to restore his sight works so seamlessly, phew thank god for that as I was beginning to scoff at the ridiculously easy ‘cure’. But we are plunged into a 3-parter to resolve the issue of the dastardly monks’ evil plan to take over the world, which apparently demands a full simulation to see if it can be done, since there's only about a dozen of them to actually invade. To stop the monks destroying the earth, a human pure of motive, of love rather than fear of the monks, has to agree to hand over the planet to them. That task falls to Bill, whose love is for the Doctor’s sight to be restored and in doing so she condemns the planet to alien control, at least for another episode anyway. In this final episode, Bill hangs on to the true images of love for her mother to resist the mind control of the monks and the planet is saved. She’s gonna need those powers when she gets cybernised in the next few weeks. Episodes 9 and 10 really annoyed me, which is I suppose an upgrade of the meh nature of most of the preceding episodes. Both contained self-professed cowardly characters who by the end of the episode have rediscovered their backbone and offered themselves to the ultimate in heroic sacrifice. I just didn’t buy these road to Damascus conversions in the slightest. In “Empress Of Mars” we were again presented with an Ice Warrior (the Queen no less), which in every episode they appear we are bombarded with narratives of how fearsome and terrible a warrior race they are and yet as has become par for the course, this episode sees them negotiated with and far removed from being brutal martialists. Just once you want to see an Ice Warrior live up to its reputed inherent nature and truly go postal on the Doctor’s a**. Well, I would anyway. Again we are offered a two-minute condemnation of imperialism, racism and slavery and I took Pearl Mackie’s expression of distaste, not to be at the preposterous statement of the Victorian British trooper, but at the notion of Moffat trying to deal with these issues in such crass manner. For “The Eaters Of Light” we have the rehashed tale of a crack in the portal of time that allows creatures from different dimensions passage into the earth, on this occasion to the time of Picts and Romans, a deeply unfair fight of technologies. Send it back, send it back is the Brexit cry, Scots and Italians working together to do so as a shining example of Remainer co-operation. Stretching a point too far? Welcome to the Steven Moffat Doctor Who world.

And thus to the climax pair of episodes. There are some great ideas flowing through this storyline, the dilation of time near a black hole, which means that a giant spaceship moving away from its gravity tug has different rates of time at either ends of its fuselage. Time crawls at the end nearest the black hole where the Doctor and Nardole find themselves, while Bill’s life accelerates apace at the other end while she awaits their rescue. Too late and she is cybernised. John Simm turns up, which is a neat inversion of past multiple Doctor’s uniting for the fight, why shouldn’t the Master pull the same perversion of the laws of time trick? Only being evil, he and Missy are never going to want to yield the upper hand to the other. Trust issues, even if there is a neat subplot of whether they actually fancy one another. But in the Vault the Doctor has been tenderising Missy to turn away from evil, so she’s a bit disposed to schizoid behaviour in her allegiances right now, while John Simm is utterly wasted to a few wisecracks about women. If you remember his total domination of the screen at his last appearances, you’re going to be terribly disappointed by what he’s given to work with here. Michele Gomez’s Missy has been pretty defanged throughout the series too and I’m gutted that this is how she has to sign off from Doctor Who in such a lame way. And finally with Bill as a post Cyberman drippy thing, the Doctor has pledged no more, that he wants to be allowed to die instead of reincarnating and dragging more companions into his lethal chaos. What a cliffhanger for the Xmas special eh? Only no, we know Capaldi is leaving, Kris Marshall is coming on board cos it’s all been trailed. I for one won’t be bothering to tune in to find out whether Bill stops leaking all over the carpet.