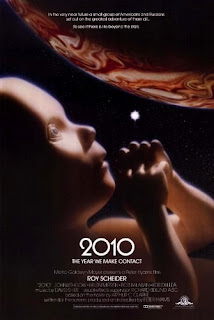 Our small band of Gunters here in The DreamCage universe are reviewing every film mentioned in Ernest Cline's Ready Player One. This week , Steve Taylor-Bryant makes contact with 2010...

2010: The Year We Made Contact. And I have to review it. After watching the sheer genius that was 2001. Why do people in the office hate me so? Anyway, once the tears stopped and I’d told my therapist about the mean people at work, I sat and watched Peter Hyams' sequel. You all remember Peter Hyams right? He’s the man who put Sean Connery on a space station in Outland. Oh joy. Anyway, a brief synopsis for 2010: The Year We Made Contact…

In the year 2001, Dave Bowman was taken by the Jupiter monolith and transformed into a powerful being. Now, in the year 2010, Dr. Heywood Floyd, the man held responsible for Discovery's failure, is going to Jupiter. He and his crewmates must reactivate the psychotic HAL-9000 computer, so they may learn what happened, and they must find out the meaning of Dave Bowman's last transmission... "My God, it's full of stars...

And so starts my main problem with Hyams' sequel. I DON’T WANT TO KNOW THE MEANING OF BOWMAN’S WORDS! I don’t want anything from 2001: A Space Odyssey explained to me, I really don’t. In the same way as I don’t want Monet to explain to me why he painted Poppies, or Van Gogh telling me the intricate thought process behind Wheatfield With Crows, I want my art left as it should be with the beauty left in the beholder's eye. Not everything in 2001 made sense to me and I can live with that. Enough worked for me to appreciate that Stanley Kubrick was an absolute genius and had produced something that no other director was capable of and that he did it at a time where technology wasn’t great. What Hyams, and I think more Arthur C. Clarke, did was make something pretty generic, very 1980’s and, in trying to ‘Hollywood’ the story and explain Kubrick’s original vision, they took a massive gamble and failed. They (Clarke, I’m telling you it was all Clarke) wanted to bring the films back to be more representative of the books, they wanted to produce a blockbuster that was clever, Star Wars with an Oscar nod if you like, and they wanted to show the world that Kubrick wasn’t all he was cracked up to be. The fact it took them nearly twenty years proves this last part moot.

As a stand alone 1980’s science fiction film 2010 is not actually that bad. The effects are tight, the casting is superb (Scheider, Lithgow and Mirren in particular) and if they hadn’t spent nearly two hours trying to undo what had come before then it could have been great. If they had just made a film based in the same cinematic universe as the first, a second in the franchise maybe, then it could have been great. It is undoubtedly Hyams' greatest film, yes even better than The Presido, and as a movie it is made incredibly well. It just rankles with me that this was an expensive exercise (by Clarke, I’m telling you, it's Clarke) to try and do something that just wanted needed and shouldn’t have been attempted. Clarke may well have been disappointed with what Kubrick did with his source material, at least that is my understanding of the situation, but why try and answer all the questions raised? Why try and take the mystique from your greatest ever achievement? Of all attempts to transfer Clarke’s extraordinary writing to the screen it was Kubrick that had the sole success. 2001 raised many questions, they didn’t need answering with an unnecessary sequel. Don’t believe me? Ask Arthur C. Clarke…”If you understand 2001: A Space Odyssey (1968) completely, we failed. We wanted to raise far more questions than we have answered.”