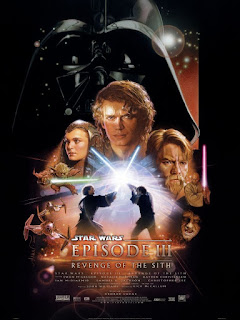 Our small band of Gunters here in the DreamCage universe are reviewing every film mentioned in Ernest Cline's Ready Player One. This week David Ames finishes another Star Wars trilogy with Revenge of the Sith...

At last we’ve come to the end of the Star Wars reviews for the RPO project. This movie is the perfect ending to a very enjoyable reviewing experience, mainly because I got to watch it all over again. I remember watching Star Wars: Episode 3: Revenge of the Sith in the theaters seven times and, much like many of the other films in the franchise, enjoying it despite the major, glaring faults. Actually to most fanboys, this is the only one in the prequel trilogy that is even tolerable.

My issues with this film will be much the same as they were for Episode 2, namely that there is too much Hayden Christensen, but overall Episode 3 has always been very enjoyable. In much the same fashion as the previous reviews in this series, let’s cover the plotline before we delve into the pros and cons.

SPOILERS WILL FOLLOW!!!!!! I cannot do this review without discussing the plot at great length so be wary…SPOILERS!

At the beginning of Episode 3, Anakin is older and much more disillusioned with the Jedi order. Obi-Wan has been keeping his marriage a secret and while Anakin was an amazingly successful general during the Clone Wars (the stretch of battles between Episodes 2 and 3), he still isn’t given the respect he feels he deserves from the Jedi council. The movie opens with Kenobi and Skywalker once again tracking down Count Dooku but this time with very different results from the end of Episode 2. Against his better judgement and the advice of Kenobi, Anakin executes Dooku on orders from Chancellor Palpatine.

When they return to Coruscant, Anakin begins to suffer from prophetic dreams of Padme’s dying and internally we are able to see him struggle with the knowledge that yet another woman he loves will more than likely die. This is a tipping point for Anakin and as the movie progresses, these fears will begin to overtake his mind and judgement of situations, setting him on the path to the dark side.

The Jedi sense fear in Anakin as well as something much larger of which they cannot not discern and so they, at the behest of Palpatine, allow Anakin to join the Jedi council, BUT they deny him the rank of Jedi Master. This is viewed as an egregious sin by both Palpatine and Skywalker and begins to drive a wedge between Kenobi and his padawan. Palpatine has begun his machinations to pull Anakin to his side. Obi Wan is dispatched to track down Grievous and when he finally encounters the cyborg, Obi Wan dispatches him once and for all. Meanwhile, Palpatine has completely poisoned Anakin’s mind, driving him to lean toward the Sith, which the Chancellor has painted as misunderstood instead of bad.

When the knowledge that Palpatine is actually a Sith Lord reaches the Jedi temple, Mace Windu and other Jedi come to arrest the chancellor but decide to kill him as he is too dangerous to be left alive. As he says later in this movie, “I am the Senate.” Although Palpatine is able to dispatch multiple Jedi, Windu gains the upper hand. Just before he is dispatched, a hurt and defeated Palpatine asks for Anakin’s help, reminding him that only the Sith know how to save someone from dying (think Padme) and so Skywalker steps in, cutting off Windu’s arm. Palpatine casts him out of the window, seemingly to his death, and Anakin swears allegiance to the Sith in order to save the republic and his wife.

Form here, Order 66 is executed while Anakin straight up murders an entire room of younglings. He is given the title of Darth Vader, taking on the role of the Emperor’s apprentice, a positon held by both Darth Maul and Count Dooku (Darth Tyranus). Palpatine dispatches him to Mustafar, a volcanic planet, where Anakin destroys what is left of the Trade Federation leadership. There he is confronted by Padme but, unable to control his emotions when he sees that Obi Wan has snuck on board her ship, he force chokes her near to death. Then he and Obi Wan engage in what is easily the best light saber battle in the entire series. After defeating Anakin, Obi Wan returns to the ship to help Padme give birth to twins (Luke and Leia) and then she dies (seemingly of a broken heart). Obi Wan hides the children with the families we will see in Episode 4 and goes into hiding along with Yoda (after a pretty badass fight scene between Yoda and Palpatine). The film concludes with Vader being placed into the suit and his realization that he has killed Padme.

Alright, so, I am sorry about all of the plot synopsis. Normally I would like to avoid such things but if you have read any of the other reviews, there is a solid chance that you have already seen all of these movies multiple times. Let’s start with the negatives first.

Once again, as with the entire series, I think that the worst aspect of this film is probably the dialogue. I know that we have talked before about some abysmal delivery from Hayden Christensen and that is still everpresent in this film but damn…some of these dialogue choices are just horrendous. Lines like:

“You underestimate my power” – Anakin

“Love won’t save you Padme. Only my new powers can do that.” – Anakin

“I have the power…Unlimited power” – Palpatine

And the list sadly goes on. Granted the delivery of all these lines is also sorely lacking but seriously…how can we expect actors to deliver these and make them sound great? Also, the very last scene with Vader when he just screams “NO!”, it is ridiculous. At a moment when we should be brought to our knees because a child we watched grow up has succumbed to the dark side and killed his love, we are instead laughing because it is out of place. If you watched that scene and felt actual emotion because of his “No,” you should probably keep watching The Fast and Furious movies and leave the good films to the rest of us.

Another major issue that most fans have with the prequels, and I can also agree that it is way overboard in Episode 3, is the use of CGI for literally everything. It seems as though even doors are created digitally. Losing out on practical effects really removes some of the immersion from the film.

All of this could be forgiven but my biggest problem arises with the transformation we see in Anakin. Watching Star Wars: Clone Wars (the amazing animated series) has helped to make some of this seem more realistic but remember that when this film was released, that series did not exist. So, instead we see Anakin struggle somewhat with darkness but still hold strong to the light. This movie begins with more moral questioning, and I can get behind the scene with Dooku being executed but from there, even as Anakin discovers who Palpatine really is, he is so easily manipulated that it is mind boggling. As the chosen one, you would think this would be a harder feat to achieve. Instead, he goes from wanting to arrest Palpatine, to stopping the unjust execution (which I understand) to basically helping Palpatine destroy the Jedi Council. Then, he goes from 0-60 in minus three seconds and murders a bunch of children…

Think about that for a second. He goes from wanting to stop someone to agreeing to murder a ton of kids. Yeah…believable.

Now, don’t get me wrong. I love this movie and it is easily the best prequel. Christensen, for the most part, is much better in this film than he is in Episode 2. Also, Mcgregor is once again amazing as Obi Wan and Natalie Portman is at least serviceable.

I was so happy to see Anakin’s transformation that it helped to dull some of the pain of the writing and dialogue delivery. The battles in this film are incredible. Obi Wan vs. Grievous is fun and interesting, the battle between Yoda and Palpatine contains some great force usage as well as Yoda flipping this way and that, and the final light saber battle between Kenobi and Skywalker is everything it should be. Also, it lasts damn near 15 minutes which is great for any fan of Star Wars.

Lastly, I will say that the scenes of Order 66 being carried out still bring slight tears to my eyes. Watching all of these great characters I have loved through prequels and the extended universe get assassinated hurts the soul but it is necessary for the series to continue.

In the end, Episode 3 is fun and entertaining and like all Star Wars movies, despite its flaws, I wouldn’t trade it for anything else. These movies have helped me to become the person I am today and have also helped to shape my view of film. I want to enjoy everything I watch and so I can block out a lot of the negatives. Star Wars has helped me to do this and I will forever be thankful for a series that has taught me the beauty of epic storytelling and world building.

Regardless of what people say, I will never stop loving this series.