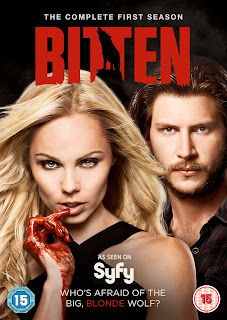 Previously only available in the US, the Complete First Season of Bitten is coming to UK DVD from 9th October, 2017...

Elena wants the same things most twenty-five year old women want: a stable home, a loving family, and a meaningful relationship. But unlike most women, she’ll never get these things, because her life is a little more complicated than most – being the world’s only female werewolf.

Elena was formerly a member of THE PACK, the powerful organized werewolf family that enforces a strict code of werewolf laws. Laws that ensure humans are safe among rogue werewolves, known as MUTTS. The Pack also makes certain that werewolf existence remains a secret, because if it ever became known that their kind existed, a fearful public would hunt them down and exterminate them from the face of the planet. Elena had broken away from the Pack, trying to re-establish a human life, but at the outset of the series she’s dragged back into the “family business”, much to her dismay. And it’s not long until all hell breaks loose...

Based on the Otherworld novels by Kelley Armstrong and starring Laura Vandervoort (Supergirl, V) as Ellen, the Canadian TV series ran for 3 seasons on Syfy until it was cancelled in 2015 and it has never been available to buy as a UK DVD box-set before.