TV - Doctor Who: The Next Generation 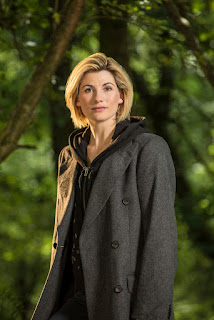 So, Sunday 16th July, the day the world ended/began. Whoever was going to be cast as the 13th (personally I think 14th, as John Hurt's War Doctor is an actual standalone Doctor. Isn't he? I'm confused) Doctor was going to divide opinion. For what seems like years Kris Marshall was odds on favourite with the bookies and half the internet exploded with 'not another quirky white dude' and half the internet defended an actor that has never let anyone down in anything and hadn't even been cast yet. My five year old son said nothing, my eleven year daughter said nothing. Speculation continued, I even wrote my own choices for the role, every single adult I know had an opinion. My five year old son said nothing. My eleven year old daughter said nothing.

Then the announcement; a video trailer of a hooded character walking through the woods towards an awful photoshop of the TARDIS (honestly, if the internet wants to kick off about anything it should be that) and lo and behold a woman was revealed. Not just any woman, a very talented one in Jodie Whittaker.

Facebook and Twitter melted under their burning end of days sky. Forums and media outlets were soaked in the evilness of the internet and any valid points were lost in the mire. For some, yes, this was a step too far and their embedded hatred of women came to the fore, for the other side there was also the extreme, the side that chided and taunted the crying. In the middle there were solid arguments for and against that were hijacked and lost. Maybe we should have invented a brand new show with a strong female character to drive forward the case that women deserve to be a headline act. Maybe we should have cared more for the change in canon that fandom hold so dear. These are valid points that deserved discussion but got drowned out by the swearing and the threats from either pole of fans. Me? I stopped caring about the show a while ago. My biggest concern with the future is that I really don't rate the show runner and it doesn't matter if you cast Laurence Olivier or Judi Dench, if the scripts are shit, the cast doesn't matter.

My love for the show is returning slowly from a source I didn't consider for a very long time, my children. I've been so obsessed with the show all my life I kind of forgot that I've grown up, it's maybe not aimed at me anymore, it's a family show I was watching without my family and getting bored by. I was bored because the gloss of wonder had worn off. It's no surprise, I'm in my forties now and the show is not written for me anymore. It's taken a long time for that realisation to occur. It took watching Chris Eccleston with my five year old son and looking at the excitement and fear on his face to realise it's not MY show anymore. It took sitting through the Tennant era, my least favourite, with my eleven year old daughter to realise it's not MY show anymore. It's theirs and ours together. I've regenerated into my dad!

My five year old son asked why the Doctor was going to be a lady, I replied the Doctor can be anyone. He was cool with that. The smile on my daughter's face melted my heart. The two of them together are planning what snacks and treats I can buy them when Whittaker finally takes over. That's enough for me. The internet will soon move onto something else to moan about, the good arguments for things will still get drowned out, but the real winners here are the Dorito and Haribo manufacturers. Marvellous.