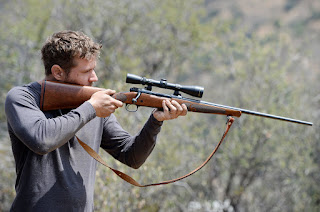 In a series of articles, Susan Omand and Steve Taylor-Bryant are going to remember the policemen, spies and criminal specialists that entertained them over the years. Today, Steve goes in search of a Shooter...


Considering my love of espionage, police man hunts and corruption in the highest echelons of government, I get bored quite easily by television shows that have these topics at the root of their story so I entered Shooter without the highest of hopes.

Ryan Phillippe (Cruel Intentions) plays ex-marine sniper Bob Lee Swagger who spends his life in the middle of nowhere with his wife, Julie (Shantel VanSanten - One Tree Hill), and young daughter, Mary (Lexy Kolker). His old forces boss Captain Isaac Johnson (Omar Epps - House M.D.) comes to visit with a request for help. Johnson now helps protect the U.S. President as a member of the Secret Service and tells Swagger of a plot for a well known Russian assassin to hit the leader of the free world at an upcoming city visit. Swagger agrees to use his knowledge as a sniper to draw up a list of potential nests that could be used for the kill shot and even practices with a weapon the Service think the perpetrator will use. He gives a few ideas to Johnson and his friends and goes to see the presidential procession wife Julie. Realising Johnson and the authorities are scoping the wrong possible target he runs to the site he believes the shot will be taken to try and prevent the assassination. He discovers a room set up with his rifle, the visiting dignitary, the Ukrainian president is shot, and a mysterious CIA agent, Jack Payne (Eddie McClintock - Warehouse 13) is there ready to kill Swagger. He escapes by leaping from a three story window but is eventually caught and imprisoned. Determined to prove his innocence, Swagger escapes and goes on the run teaming up with an FBI agent, Nadine Memphis (Cynthia Addai-Robinson - The Accountant) to show the world he has been set up and framed by the very government he used to fight for.

Quite a simple concept is actually written really well and Shooter is a cut above generic television. The casting is interesting and exciting too. I love seeing Omar Epps as the conflicted bad guy who just wanted to reach the top but fell somewhere along the way, Tom Sizemore as the evil CIA chief that is more than a bit dodgy allows Sizemore to unleash that gravelly voice and intense stare and I love when he does that, and it has David Marciano in it from Due South so that's a big bonus. Eddie McClintock is highly watchable and as enjoyable to see work as ever. I wasn't familiar with either Shantel VanSanton or Cynthia Addai-Robinson before but they do well as wife and agent respectively, which brings us to Ryan Phillippe.

I'd only really loved Phillippe in The I Inside before, finding him either annoying or underused in stuff but as the main man in Shooter he proves he's more than a pretty face, he can actually act and act well. He has to show a range of emotions and yet keep the killer instinct and intensity etched on his face and he does so surprisingly well. Shooter won't be for everyone and not every episode hits the mark but it opens really well and about mid season when the flashbacks give you more back story, especially about Swagger and Johnson's relationship, it kicks up a notch. It's on Netflix now with new episodes of season 2 due weekly and worth investing some late night binge time into.