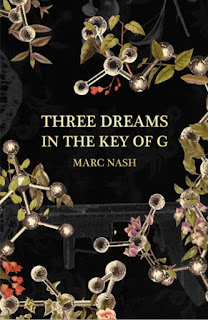 Three Dreams in the Key of G, the new novel by Marc Nash, comes out in October published by Dead Ink Books BUT you need to pre-order it NOW...

Why so insistent on getting pre-orders, we wondered. Well, it turns out that Publishing the Underground is Dead Ink’s ambitious programme to support emerging authors. The editing, design and production of the books has already been done – they’re ready to go! Now all you need to do is pre-order so that Dead Ink can gauge the size of print run to do. It's kind of like crowdfunding but you know at the start that you're definitely going to get the book when it's published in October.

As the Dead Ink website says "You don’t simply buy a Dead Ink book, you invest in the authors and the books you love." Well, we love Marc Nash here at The DreamCage (and not just because he writes some articles for us) so we're also asking you to invest and pre-order Three Dreams in the Key of G.

The book is available to pre-order throughout August on the Dead Ink website as either eBook, Paperback or Limited Edition Signed and Numbered Hardback or you can even own it as one of the Signed/Numbered Hardbacks with an Exclusive A3 sized print of the cover artwork by Michael Lacey.


Here's more about the story, thanks to Marc:

In post Peace Agreement Northern Ireland, a young mother feels besieged. Both by the demands of motherhood and her militant Loyalist husband, decommissioned with the advent of Peace and thrown back into the world of the domestic hearth; whither the violence of his soul? To stop her mind becoming silted up through inactivity, surrounded by the infantile and the exasperating, she maintains a journal. Through which she pursues questions of nature versus nurture in the development of her children, within a divided society such as Northern Ireland, proffering its rarefied environment of acquired symbol and historical legacy. Only, why is her journal all out of sequence and what meaning can it therefore provide to answer her despairing question, 'why do we even have children?'

In Florida, a British septuagenarian with no papers and no official existence, also finds herself under a state of siege. Her community is currently surrounded by FBI, ATF and DEA armed agents. Yet they are not a sect of any kind, rather a refuge for battered women. And while it is true she does have a scheme for redrawing the map of the world, it could hardly be said to be a doomsday scenario. Except maybe, if you're a male of the species. Her fight is for hearts and minds, which might explain why her principal manifestation appears to be through the internet. Where lurk useful allies for her in the war of information technology.

In commercial laboratories all over the world, the human genome is being decoded and compiled. Or ravished and dissected depending on your point of view. What is that textual voice feedbacking through the monitors? Protesting the assault; challenging the epistemologies of both scientist and theologian; chiding us for our linear notions of relationship, the depleted metaphors with which we construct thought and even our 26 letter alphabet in the face of the genome's intricate weaves formed from combinations of just 4 letters. Goading us that we will never unravel the mystery that lies behind the genetic code, unless we open up our very natures to unlimited potential.

Three powerful female characters, Mother, Crone and genetic Creatrix. None of them will meekly submit to their besiegers. Their three narrative voices, intercut and interweave with one another. In a sense, all three are palimpsests, constantly writing over, and being written by, one of the other two. Whether they are aware or not, they are being informed by another intimate voice so close at hand, as to be under the skin. Will the language they are able to draw on, be sufficiently robust to meet their enquiries, or will it betray them and lead the triumph of their besiegers?

Marc Nash has published five collections of flash fiction and four novels, all which look to push narrative form and language [Read the Defective Inspector's review of Extra Curricular and Susan Omand's review of Time After Time]. He also works with videographers to turn some of his work into digital storytelling. He lives and works in London in the NGO realm (and he writes for us here at DreamCage Media Group, so what are you waiting for?).