Gaming - To Be A Gamer 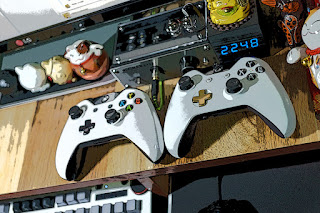 We often talk about various games and you read our reviews and opinions but what does it actually mean to you to be a gamer? What role does gaming play in your life? Neil Gardner shares his experience...

Gaming has been a big part of my life since the advent of the Atari home systems and our first BBC Micro B. I’m of the generation that grew up bedroom coding, arguing over the merits of the Spectrum vs the BBC B vs the Commodore. I know the pain of cassette-loading failing after 40 minutes. I’ve seen the evolution of gaming over 30 years and loved every moment of it.

But here and now, summer 2017, I find myself unable to play games. I have a lovely PS4, an R2D2 styled Xbox, a PS Vita and a 3DS… and since March I’ve been unable to bring myself to play on any of them. During a time of great emotional and personal upheaval, I’ve not been able to find solace in those amazing gaming worlds I’ve loved for so long.

This is becoming a real issue for me. Not only have I found myself still buying the hottest new games, but I often chide myself for not making use of these incredible devices. Why am I avoiding them…actively going out of my way to keep them hidden in cupboards or simply powered down? My PS4 has been in standby mode in the middle of a game of LEGO Worlds for months.

Well, taking a good long look into my abyss of a soul, it is because I find myself resenting these devices and games. I realise that I hold these pieces of entertainment partly, strongly, responsible for the failure of my 7 year relationship with my now former-fiancée. When she left at the end of February it wasn’t due to infidelity with any other human, but due in large part to her relationship with her PS4 and the community she had found there. I am wary of using the term addiction, but I do wonder if, over the previous 12 months, she had become addicted to her PS4 and its extended family. She certainly played more hours of Destiny than were healthy for our relationship.

Now, this isn’t a piece about me venting my frustrations about the end of a relationship I had thought would be the lifelong one we dream about. What I want to explore is why I, a lifelong gamer, just can’t get past my resentment towards my PS4 and other gaming devices. I love those consoles and their games. I have spent years inside those worlds and befriending those characters. Whilst not a hard-core gamer (I don’t do FPS for example), I’ve always enjoyed having games to hand for a few hours an evening…especially ones where you can roam freely or be part of an epic storyline (Ni No Kuni being by all-time favourite). So it has been frustrating not being able to take advantage of these games as I transition from long-time partner to newly single chap-about-town. I’m glad I’ve not fallen headfirst into games, allowed them to consume me. This, I suppose, is my reaction to seeing my former partner do something similar and it adding to our eventual break up. But I mourn not being able to just switch them on and enjoy an hour’s worth of silly fun gaming time.

I’ve tried a few times, using LEGO City as a gateway drug to easy myself back in, but within an hour found myself getting angry and annoyed. I spent a few hours with the second Yo-kai Watch game, but couldn’t find the pleasure in the grinding and secret hunting that I had for the first game which I’d shared with my partner. Pokemon sit bored in grass across the lands as I utterly fail to catch any of ‘em!

I want so much to re-embrace gaming. I am trying to get back in every few weeks with an hour or so on various games. I recently bought the new Wipeout game as it is such an important part of my gaming history…so maybe that will win me over. I am re-exploring LEGO City, and hope to return to Japanese fantasy in the New Year with Ni No Kuni 2. But it feels like I am pulling myself through prickly bushes, dragging myself uphill. I really hope I can make it, and lose this sense of resentment and loathing. It isn’t fair to the games or consoles, and it isn’t who I want to be.