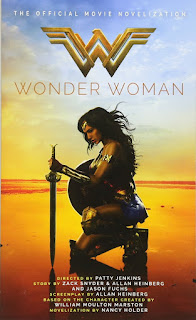 While waiting for the film to come out on DVD, Steve Taylor-Bryant reads the official novelisation of Wonder Woman by Nancy Holder...

Before she was Wonder Woman, she was Diana, princess of the Amazons, trained to be an unconquerable warrior. Raised on a sheltered island paradise, when an American pilot crashes on their shores and tells of a massive conflict raging in the outside world, Diana leaves her home, convinced she can stop the threat. Fighting alongside man in a war to end all wars, Diana will discover her full powers... and her true destiny.

I have often wondered the point of tie-in novels for cinema films or television shows. Some are pretty good, the Arrow books from Titan for example, some are doomed to failure though not at the fault of the author, sometimes the source material is just really poor (Noah, I'm looking at you). Wonder Woman is sort of centre ground. The film is an epic watch and, whilst the book pretty much follows what happens on screen, it loses something in translation as it's very hard to get the feeling you have watching an event unfold on screen to transfer to words on a page. Maybe I'm just an old man that expects too much but I want a book to be different to a screen adaptation through ulterior motives, maybe it delves deeper into a character than a blockbuster movie allows, maybe it adds some subtlety in the story that epic summer releases don't allow for. I don't know, but something has to be different to grab my attention.

However, whilst Nancy Holder's novelisation of Wonder Woman does nothing for me as I wait for the blu-ray release, I realise it may not be me that is the target audience. After I read the review copy I was kindly given, I put it on my pile of stuff to get boxed up and forgotten about when my daughter, now seriously getting into the superhero genre largely off the back of Wonder Woman, asked if she could read it. The smile on her face when she'd finished was matched only by the look she had after viewing the film so maybe these tie-in books do after all have a purpose. They aren't released to please grumpy old men like me, they are on the market to please a new audience, an audience finding their way from children's books to their own epic reads. If it was just for me then Nancy Holder wouldn't be selling a copy, my daughter however now wants to spend her pocket money on other Nancy Holder books, on more Wonder Woman adaptations, and that's a beautiful thing.