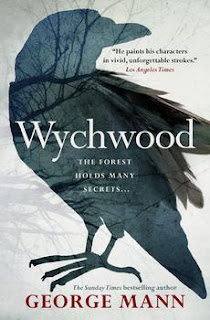 Published next month by Titan Books, the forest holds many secrets in Wychwood by George Mann...

From the bestselling author George Mann comes the start of a gripping new supernatural crime series that mixes myth, magic and murder.

After losing her job and her partner in one fell swoop, journalist Elspeth Reeves is back in her mother’s house in the sleepy Oxfordshire village of Wilsby-under-Wychwood, wondering where it all went wrong. Then a body is found in the neighbouring Wychwoods: a woman ritually slaughtered, with cryptic symbols scattered around her corpse. Elspeth recognizes the symbols from an ancient local myth of the Carrion King, a Saxon magician who once held a malevolent court deep in the Wychwoods. As more murders follow, Elspeth joins her childhood friend DS Peter Shaw to investigate, and the two discover sinister village secrets and dark forces harking back decades.

Billed as Midsomer Murders meets Rivers of London, Wychwood is an addictive and highly immersive read that questions what secrets lie beneath a cosy small town façade.

Wychwood is published on 12th September