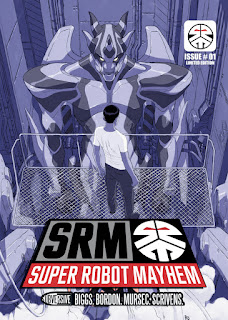 Super. Robot. Mayhem. What's not to like in these three words put together as a comics title? Susan Omand read issue #1...

Sometimes we really hit it lucky with some of the on-spec review copies we get sent here at The DreamCage. As a Manga fan I will admit it was the title of this comic from Subversive Comics that caught my attention first – I mean, Super Robots? Hell yes! Reading further into the email and seeing influences such as Akira and Gundam Wing crop up acted as further hooks and, by the time I got to “features design work from Paul Nicholson,” who has designed logos and typefaces for Aphex Twin and worked with Production IG on Ghost in the Shell (he designed the Laughing Man logo), I knew I had to give this a go. So does the comic live up to the hype?

"Raiden Nakamura is infected by an alien mind virus that causes him to bond with the mysterious mecha MAYHEM. Together, they are the only thing that stands in the way of the invading Demon Imperial Alliance. But Raiden’s union with MAYHEM comes at a price. Slowly losing his identity, Raiden’s battle for control threatens to destroy not only his sense of self, but also the existence of everything he holds dear.”

Issue #1 seems to be the story of how Raiden got into the situation described in the synopsis because the story starts much further into the future than that as we see two astronauts board a wrecked space warship, the Vladislav Surkov, and discover a still working cryo-stasis chamber. Flashback to the “present day,” which is before the infection mentioned in the synopsis, and we get a feel for Raiden’s character, and that of his friend Ulysses, as they work together as engineers on the ISS Theseus in the Kuiper belt. Raiden is the restraint to Uly’s risk taking, the calm to Uly’s impetuousness and they work together well as a partnership, almost like brothers. All this action and character building takes place though under a voiceover of Uly being interrogated. About Raiden being a collaborator. Oooohhhh! 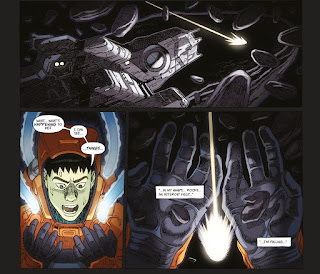 However complicated the multiple timestrands sound when it’s described like that, it really works when you see it in practice and the characters involved are instantly engaging, with the past/present/future of time throwing out intriguing morsels of information that makes you want to read on making this a much more interesting than normal “pilot” issue. And yes, there is a real Manga feel to the story so far, with potential for a lot of depth and complexity as well as hi-tech explosive action and violence. Something else I feel I have to mention, because it’s so cleverly done here, is the diversity of the crew. This is how equality in comics, and indeed all entertainment, should work – the fact that Uly is in a wheelchair and the science officer, as well as some of the engineering crew, is female is not shoved in your face in a “look at how PC we’re being” kind of way, it’s just accepted as fact. So much so that I didn’t really want to draw attention to how wonderfully it was handled because this is how it should always be done – people are, after all, just people – only it’s not, so I have to.

So anyway, that’s a big tick for the characters (so far) and for the story, what about the art? The artist’s ability to draw machines and technology is undeniable, the level of detail is amazing, his consistency with drawing faces is more variable (stubble or no stubble? We’ll let that pass for now), and there’s an innovative use of foreshortening with unusual “camera” angles, however it’s the colouring that really captivated me throughout. From the blues and cyans of the future ship’s interior to the stunning subtlety of the mottled greys of the asteroid, the bright blurred flashes of explosion and a nice use of artificial depth of field, the colours really helped to build an atmospheric environment for the action.

So what's not to like? Nothing. It's a strong start for a new comic and I’m intrigued to see if this high production value continues into issue #2, which starts crowdfunding shortly.

Super Robot Mayhem is published by Subversive Comics and Issue #1 will be available from 4th September at www.subversivecomics.com