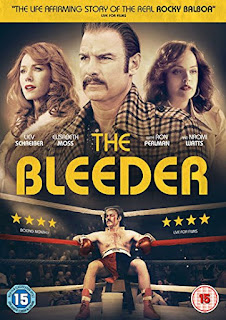 Out now on DVD/Blu-ray and Digital, Tony Cross rolls with the punches and watches The Bleeder...

The Bleeder – or as it is known in the US, Chuck – is a film about Chuck Wepner (Liev Schreiber). Wepner’s fight against Mohammad Ali in 1975 was the seed for Sylvester Stallone’s ‘Rocky’. Wepner had been expected to be beaten quickly and easily but he managed to survive until almost the end of the fight before Ali finally bought him down. Wepner might not have been the most skillful of boxers but he could take a beating.

There’s something about boxing that seems to make for good films (and an equal and opposite force that makes films about football/soccer almost universally awful.) This is good. It’s no ‘Rocky’, but that’s because it focuses more on the fallout from Wepner’s fame than on the fight itself. If you want a film with fight scenes in it this probably isn’t for you but if you want to see a film that focuses on how fame can impact on not just one man but on his family and friends. Wepner never seems the sort of man to resist the temptations offered him. Before he hits the big time he’s already sleeping around, which leads to a fantastically uncomfortable scene where Wepner is confronted by his wife, Phyllis (Elisabeth Moss), in a diner where he’s chatting up a younger woman. It’s brilliantly played by everyone involved and Phyllis is matter-of-fact ruthless dismissing both her rival and Wepner.

So, Wepner’s fall isn’t unexpected. Everything comes his way: wine, women and drugs & just he rides a secondary wave of fame after the release of Rocky. There’s a whole series of scenes with Wepner trying to meet Stallone (Morgan Spector) which are awkward as hell, then nicely positive and then, when Wepner tries to audition for a part in Rocky II, back to maximum awkward again. 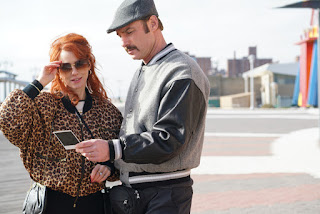 Wepner’s life spirals out of control until he ends up arrested and in prison. On the edge of his life throughout though is the red-headed Linda (Naomi Watts) with whom Wepner thinks he has a link. Naomi Watts is both brilliant and almost unrecognisable as Linda, who functions a bit like Wepner’s conscience.

The potential mess that his life could be is shown by Wepner quoting from, and the film intercutting to, the 1962 film, ‘Requiem for A Heavyweight’ starring Anthony Quinn. Boxing, with its obvious links to gangsters and gambling and the physical price boxers can pay, makes for fantastic drama. I’d almost describe this as ‘meta’ but that would be going too far I think.

The best reason for seeing this film though is to see a fine cast at the height of their powers. Schreiber is excellent in the lead, Elisabeth Moss and Naomi Watts are brilliant as the two main women in the film. But the supporting cast is also pretty damn good. Morgan Spector does a fine Stallone, without making it an impression. Ron Perlman is great as Wepner’s trainer, Michael Rappaport as Wepner’s brother (and there’s some fantastic scenes between Schreiber and Rappaport.)

You will have noticed the word awkward came up a lot above and there’s scene after scene that awkward or uncomfortable to watch as Wepner screws up, tries too hard or simply fails. But then there are moments when Wepner comes across as a good man, which is what we’re supposed to feel. And I suppose this is the story of a monumental screw-up who got lucky, pushed his luck to the point that it bounced back and flattened him. It’s the story of a boxer who got knocked down, got up again, got knocked down again and got up again.

So, perhaps it is just the story of a boxer.