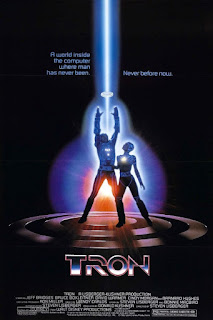 Our small band of Gunters here in The DreamCage universe are reviewing every film mentioned in Ernest Cline's Ready Player One. This week, Steve Taylor-Bryant steps inside the computer world of Tron...

When a brilliant video game maker named Kevin Flynn (Jeff Bridges) hacks the mainframe of his ex-employer ENCOM with his ex-girlfriend's new boyfriend (Bruce Boxleitner), to try to prove that his game designs were stolen by senior executive Ed Dillinger (David Warner) he is beamed inside an astonishing digital world and becomes part of the very game he is designing.

Tron is the reason I am not a gamer, that’s quite a statement to make I know but it is most definitely true. Kind of. Okay, Tron and really small thumbs that are pretty much useless for anything. Tron was an epic look at computer games you see and in 1982, I was 7, it was right at the start of when gaming and arcade games were becoming both popular and accessible for all pockets and it blew me away. It was a neon filled acid trip for children, a sugary gaming overload that sneaked inside every child's imagination and made technology and the age of computing relevant and exciting. Until you actually played a game, with bad graphics and awful sound design, and you didn’t get sucked inside the machine on the adventure of a lifetime like Bruce Boxleitner did. When you played Manic Miner or Paperboy and you didn’t find yourself confronted by Jeff Bridges. It's not the first or last time that pop culture has lied to me but it is the one that hurts the most. Along with my weird thumbs, Tron took away any ability I had to enjoy this new and exciting entertainment form.

The film was a plethora of effects thrown directly at my retinas and my imagination was running wild, now addicted to Walt Disney’s drug – the movie. Seven is a strange age to be at the best of times, you think you are grown up enough to play with the cool kids and yet you still suck your ridiculous looking thumb and believe in Santa, but belief is important. Santa works because every time you think he doesn’t exist, presents appear under the Christmas tree, every time you think the Easter Bunny is a childish idea, you find a chocolate egg, every time you play an arcade game though you don’t end up inside the game riding the second coolest motorbike ever committed to celluloid after Street Hawk. I can completely side with those critics who lamented the believability of Tron. They were, however, wrong weren’t they?

Tron doesn’t date. It is as visually stunning today, some 35 years later, as it was to a 7 year old who had sneaked into the cinema with no one spotting him; small thumbed people are sneaky, very sneaky. It holds up as a story all these decades since its release, in fact, without the ideas put on screen in Tron, you probably wouldn’t have had the advancements in Virtual Reality that we have had, and therefore Ready Player One would never have been written, its no surprise that VR exponents are of the age that Tron would have been their favourite movie as kids.

Tron may have ruined my potential gaming career but as a film it was a remarkable landmark moment. It pushed computer graphics and visual effects to their very limits, it made the imagination work overload to keep up, it took what seems like a relatively simple idea by today's standards and created a universe that the viewer couldn’t help but get lost in. It had revolution in its soul, conflict and gladiatorial moments, it was a futuristic tale of the old fashioned ‘good vs evil’ motif and it was stunning in its execution. If you think there is a better film of its type out there then, first up, you are wrong and, secondly, what do you think it was that allowed your dumb choice of better movie to made? Tron, that’s what.


Now I am going back to my Jeff Bridges monument and taking my small thumbs with me. You? GO AND WATCH TRON!