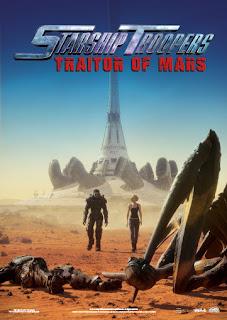 Watch the trailer for the new animated film based on characters from the book by Robert Heinlein...

Remember Starship Troopers? The book was, of course, amazing. The first film, released twenty years ago [no, hang on... 1997 was only... Ah. Never mind.] and directed by Paul Verhoeven, was surprisingly good with a superb cast and became a cult classic. The sequels, not directed by Paul Verhoeven, were unsurprisingly very very bad. But did you know about the animated films? In 2012 the first animated film Starship Troopers: Invasion came out, directed by Shinji Aramaki and now he co-directs the follow up Starship Troopers: Traitor of Mars. By the looks of the trailer this promises to be a fantastic looking film and it's exciting to see that a couple of the 1997 film's main cast members are involved voicing their original characters; Casper van Dien plays Johnny Rico and Dina Meyer returns as Dizzy Flores.


The film comes out in the US next week on digital download so it will be worth keeping an eye open for the region-free blu-ray planned for September 19th.