Steve Taylor-Bryant delves into the unknown as he breaks down twelve seasons of Supernatural into 12 Top 5 articles.  His top 5 from season six...


I'll be honest from the outset and tell you I really struggled putting together this list. Not because, as with previous seasons, there is much too choose from, no. I disliked most of season 6. I can't tell you why as I can't work it out myself but some of it just feels like they all stopped trying. Maybe it was because they put their all into an astonishing fifth season believing it was their last, maybe they picked the wrong creative team to drive it forward, maybe it's because whatever came after season five was going to underwhelm. There was nothing wholeheartedly awful but it was just okay, no better than fine, and I found myself wondering if maybe the idea had been taken as far as it could go. I wasn't left with a feeling of awe like previous years and I felt no excitement at continuing into season 7, however I also didn't feel I'd wasted my time. It was just okay television with a couple of high points but nothing like the televisual experience I had become accustomed to. That being said, when I rewatched the season for this list (by the way the only season I have needed to rewatch to grab five standout episodes) I did find some storytelling and humour I glossed over or missed on the first viewing. For what it's worth my season 6 top 5... 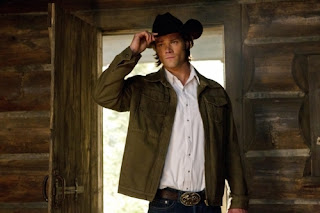 “Dean: Because you know me, I'm a posse magnet. I mean, I love posse.”

Dean and Sam learn in Samuel Colt's diary that ashes of a Phoenix may defeat Eve and they summon Castiel to send them back to 1861, to Sunrise, Wyoming, where they can meet Samuel Colt and get the ashes. Casteil gives twenty-four hours to the brothers to get what they want; otherwise their return may be dangerous. Will the brothers be well succeeded in their intent? 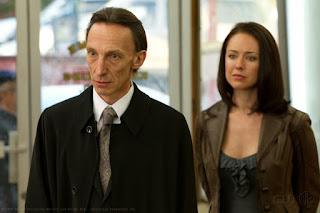 “Tessa: Just so you know, when people die, they might have questions for you. Well, not you, but Death.

Dean Winchester: You mean, like "How did Betty White outlast me"?”

Dean goes to Dr. Robert to have a 3 minutes near-death experience to meet Death. They have a meeting and Death proposes Dean to wear his ring for 24 hours; in return, her would bring Sam's soul back and put a wall to isolate his traumatic period in Hell. Dean plays Death with Tessa and soon he learns that the natural order cannot be violated. Meanwhile Sam summons Balthazar to have a spell to avoid having his soul back and he needs to kill Bobby for the spell work. 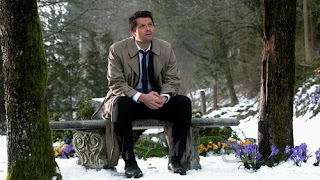 “Castiel: Don't worry about the Winchesters.

Crowley: Don't worry about... what, like Lucifer didn't worry? Or Michael, or Lilith, or Alistair, or Azazel didn't worry? Am I the only game piece on the board who doesn't underestimate those denim-wrapped nightmares?”

Castiel tells Sam, Dean and Bobby about the war in Heaven and how he and Raphael became enemies. Bobby believes Castiel is hiding something, but Dean refuses to believe it. 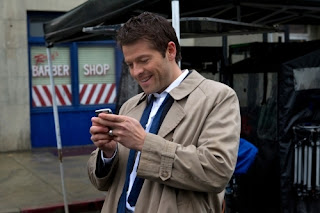 “Misha Collins: [to Sam and Dean] You guys! You really punked me! I'm totally gonna tweet this one. "Hola, Misha-migos. J-Squared got me good. Really starting to feel like one of the guys."

Balthazar meets Dean and Sam and tells that Raphael and the other angels are hunting them down and he sends the brothers to an alternate Vancouver in a parallel universe. The Winchester brothers learn that in this Vancouver, they are actors of a TV show called "Supernatural" and Sam is married with Ruby, actually the actress Genevieve Nicole Cortese Padalecki. When they make a spell to return to their universe, they also discover that magic does not work in this universe. 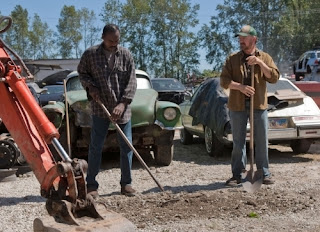 “Crowley: Feels good to get it off my chest. We should make this a thing.

Bobby Singer: Do I look like Dr. Phil to you?

Bobby summons Crowley and finds that the demon has no intention of returning his soul and has given ten additional years of life for him. Meanwhile, Dean and Sam ask Bobby to advise which demon is killing people in Wisconsin, and after a long research, Bobby informs that is a Lamia. Then Rufus knocks on Bobby's door with the corpse of a demon Okami to bury it. However the demon is still alive and Bobby has to seek it out and vanquish the demon. Dean and Sam travel to Scotland and help Bobby to get his soul back. When Bobby is ready to eat a slice of the peach cobbler his next door neighbor Marcy Ward gave to welcome him in the neighborhood, he receives another urgent phone call.