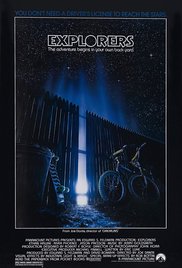 Our small band of Gunters here in The DreamCage universe are reviewing every film mentioned in Ernest Cline's Ready Player One. This week, Nate McKenzie's adventure begins in his own back yard with Explorers...

A boy obsessed with 50s sci-fi movies about aliens has a recurring dream about a blueprint of some kind, which he draws for his inventor friend. With the help of a third kid, they follow it and build themselves a spaceship. Now what?

As far as film synopses go, that description of Explorers from IMDb.com is one of the worst. Good thing IMDB didn't exist when I was a kid and my Dad just showed me the film as part of a constantly refreshing cycle of 80s nostalgia canon that included E.T., Flight of the Navigator, The Goonies, Harry and the Hendersons, Short Circuit, *batteries not included, and SpaceCamp, among many others. The time before The Internet, and its deluge of terrible opinions, is objectively better than everything that has come to fruition since.

That's not the curmudgeon in me making that statement; the generation that is growing up now will save us all, I believe. But a movie like Explorers would not be made the same way now as it was in the 80s. It would be glossy, hermetically sealed in focus-group approved bright packaging, and force-fed to the masses.

Explorers stars Ethan Hawke and River Phoenix as two of the three leads, and they were both already familiar faces on screen in that era. Even so, director Joe Dante allowed the kids to be just that: kids. Child actors portraying children on screen. Novel concept, eh?

In 2017, they would be directed in such a way that the characters would appear more mature, cultivated. Kids on film in 2017 are bitingly sarcastic and witty, able to keep pace with snappy banter. Hawke and Phoenix, along with Jason Presson, were talented but unpolished, which lent to Explorers a believability factor amidst an outlandish story of three young teenagers building a spaceship from a Tilt-A-Whirl carriage and flying to outerspace for a meet-and-greet with a couple of aliens. The young actors are endearing in the movie because we all either were them, or knew them, in our lives.

Now, let's talk about those aliens.

It would be unrealistic to expect all movie aliens to look, I don't know, cool? I don't mean they have to look like Bowie in The Man Who Fell To Earth or Bridges in Starman; but steering away from a Luc Besson-esque style of design would be a great start. Unfortunately, the aliens in Explorers still deter a bit from the "magic" of the film. In Flight of the Navigator, the aliens are campy and somewhat cheap looking, but that's what works for that movie because it doesn't delve too deeply. Explorers has an introspective quality that makes it so earnest. Ultimately, though, the aliens Wak and Neek can't ruin a movie that starts out so beautifully.

The hints at classic SciFi media in the first half of the film, and throughout, hit something deep in me personally; This Island Earth is a wonderful film from the early era of great SciFi space adventures and every time I see it playing on Ben Crandall's tv it deepens my love for this film. Director Joe Dante's love for SciFi comes across with sincerity in this film, as well as his other films directed at younger generations. It is a beautiful thing to experience a film in which a director is attempting to share his love for cult classics with others and then see one of his own films fall under that umbrella.