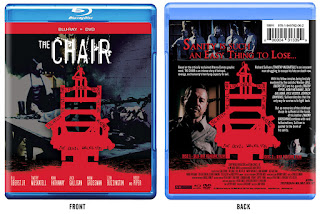 Alterna Comics' horror film The Chair is now available for pre-order on Kickstarter...

Based on the 2008 graphic novel by Peter Simeti and Kevin Christensen, The Chair was turned into a feature film in 2015 and enjoyed a limited theatrical release in 2016 and has been touring conventions and film festivals since.

Now the film is coming to blu-ray & DVD this October and a Kickstarter has been launched to not only provide backers with some exclusives, but to also raise funds to format the film for digital releases through iTunes and Google Play with eventual stretch goals in mind for Hulu, Netflix, Amazon Prime, and more.

Peter Simeti, the creator of The Chair, had this to say about the film’s return to Kickstarter, “The film adaptation of The Chair started its life on Kickstarter and I think it’s fitting to have one last hurrah on there. We’ve grown a lot since our previous two campaigns and I hope that this run will be able to provide something for new backers as well as for our past backers that have supported this project from the beginning.”

The Kickstarter offers various rewards, including original artwork; signed memorabilia; Alterna Comics graphic novels and single issues; and the most unique exclusive of them all: a fabric swatch of wardrobe worn by an actor during filming. The swatch is included with each copy of the blu-ray & DVD combo and comes with a Certificate of Authenticity that is also signed and verified by Simeti. The Kickstarter is the only place where this item will be available.

To find out more visit the kickstarter page at https://www.kickstarter.com/projects/petersimeti/the-chair-pre-order-the-horror-thriller-based-on-t