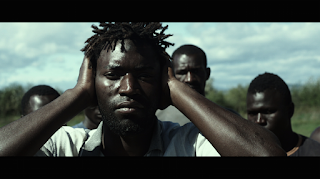 Susan Omand steps up to the spot to watch the short film Penalty...

Penalty shares the story of a group of guys playing football in the middle of nowhere. There is a much more than a simple victory at stake.

Right from the start there is a sense of foreboding in this short film. We can see a storm is coming in the darkened skies as a group of men pick straws to see who will referee in a game of “shirts vs skins” football. This apprehension is compounded aurally as well as visually as the game progresses, first by hearing radio commentary of a different game, heightening the suspense, and then with a stunning use of slowed down film, which augments the shouts and heavy breathing of the players to an almost animalistic quality to accompany the close-ups of tense, sweat covered faces and you don’t quite know if the racing heartbeat is on the film or in your head, the atmosphere is that palpable. Then a penalty is called...

This is a cleverly put together film, especially for its 15 minute runtime, with a well thought through plot and even though I had noticed the set ups to the twists before they happened, the realisation that your guess is actually close is still pretty shocking. I’m trying not to give spoilers away but what was even more surprising to me than the disturbing storyline is finding out at the end of the film that the cast are not actors by trade, instead they are people the director, Aldo Iuliano, lived among in Italy. What they must have felt acting out what, for them, were very possible scenarios is very hard to grasp but they worked well in their roles, making very real, and extreme, situations feel even more genuine. The minimal dialogue helped, I think, as it let the story built in the audience’s head in a way that explaining could never have done so convincingly. And I must, again, mention the soundscaping and the music, by Enrico Melozzi, used in the film as this set me on edge, in a very good way, from beginning to end and made me even more receptive to both the surface story and the much more distressing underlying message.

Watch the trailer below to get a feel for the film then look out for it at the festivals.