TV - A Discovery of Witches 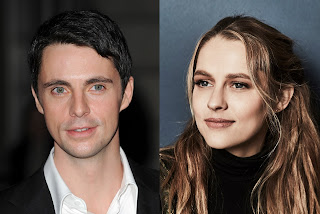 A new TV adaptation of the bestselling novel A Discovery of Witches by Deborah Harkness is coming to Sky 1...

A Discovery of Witches is a contemporary love story set against the backdrop of Oxford academic life, but in a world where a handful of witches, vampires and daemons live and work unseen amongst humans, hiding in plain sight. Teresa Palmer will star as brilliant academic and historian Diana Bishop (Teresa Palmer), a reluctant witch denying her heritage. The discovery of a manuscript in Oxford’s Bodleian Library throws her into the heart of a dangerous mystery – and into the path of enigmatic geneticist Matthew Clairmont (Matthew Goode), who we discover also has a dark family secret: he is a vampire.

As Diana and Matthew embark on a journey to understand the secrets of an ancient manuscript and as their relationship develops and their heritage comes in to play, events threaten to unravel the fragile peace that has long existed between witches, vampires, daemons and humans.

Commenting on the TV adaptation, the book's author author and series executive producer Deborah Harkness said: “Teresa and Matthew perfectly capture my characters – I’m so excited by the casting and how they will bring the books to life.”

A Discovery of Witches was commissioned for Sky 1 by Sky’s head of drama Anne Mensah and director of Sky 1, Adam MacDonald. It has been adapted for screen by writer Kate Brooke ( Mr Selfridge ), co-founder of Bad Wolf Jane Tranter will executive produce and Juan Carlos Medina (Painless) is the director.

Commenting on the commission Anne Mensah said: “A Discovery of Witches is a proper love story for grown-ups. However, the fact that it also examines science, magic and being ‘other’ in the modern world makes it a must watch. Deborah Harkness and Kate Brooke have given us a drama that packs both an emotional and thought-provoking punch. With the breathtaking vision of director Juan Carlos Medina and the Bad Wolf team, I feel very confident we are offering our customers something truly magical.”

Showrunner Kate Brooke added: “The show is a relationship drama, grounded in emotional truth. Diana and Matthew, like all couples who meet and fall in love, at times struggle to understand each other and come to terms with their differences. And if you’re a vampire and a witch - those differences are huge.”

Starring Matthew Goode (Watchmen, The Good Wife) and Teresa Palmer (Hacksaw Ridge, Point Break), this Sky Original Production from Bad Wolf will begin shooting in September at the new Wolf Studios in Wales and on location in Oxford.