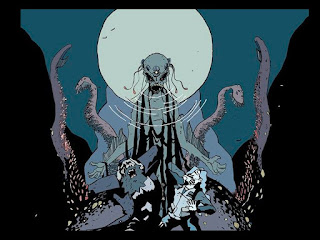 From writing duo Rob Jones/Mike Sambrook and artist Rory Donald, Griff is back and, along with his sidekick, Justine, they're investigating a devastating magical attack upon a cruise ship. With events linked to a shadowy group from Griff's past and a ruthless assassin seeming hell bent on ending the lives of Griff and Justine, will our Crusty Fisher Punk survive and figure out just who is behind the recent spike in spectral activity...?

It’s been more than a year since Griff Gristle’s debut and I will admit that I was a bit trepidatious (yes it’s a word, I checked) about heading in to issue 2 after being such a fan of the first one (read my review of that here.) Even with the magnificent madness of Madius Comics there’s always that slight chance of the “difficult second album” for even a character of Griff Gristle’s greatness, isn’t there?

No, it turns out there isn’t. The Siren’s Song is JUST as good as you all are hoping for and the strong story had me (fish)-hooked from the start. Talking of the start, I think this is the first comic I’ve ever seen with a pre-credit sequence! And what a great set up for the main storyline. It also felt like there is a lot more action and physicality this time compared to issue 1 and Justine is very much up to the task, proving to be a very effective friend for Griff to have at his side in a fight. All this violence though doesn’t detract at all from the depth that Jones and Sambrook manage to instil into their main character as Griff’s backstory gets even more filled in with his dark humour, off-the-cuff comments and slips that nobody but the reader picks up on. And intrigue still remains with the epilogue this time, “Awakening,” making us as readers ask even more questions about him and what he did to get into this chaos in the first place. It’s subtle, brilliant work. 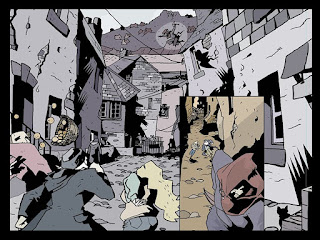 As for the artwork, yet again I’m blown away by Rory Donald’s awe-inspiring use of black and muted pastel colours, even moreso in this issue as he manages to convey everything from fireworks to gore-fests without a “bright” among them. Include the “what-the-hell-is-THAT”-ness of the look of the ship’s attacker and it all adds up to a highly atmospheric, suspenseful visual without being obvious and makes things like the lettering of the sound effects really stand out in a very good way. A small word about the lettering too, as Rob Jones’ sublime letter-work always merits a mention and the alternate typeface for the Siren, as well as making it nice and easy to follow the off-panel conversations, added a real age and echo to the voice that could not have been achieved any other way. Amazing.

The end of the comic is taken up with some superb pin-ups of Griff and Justine, all radically different and all brilliant in their own right, by some very exciting comics artists. If I had to choose a favourite, though, it is Horrere king Alisdair Wood’s “The Fisher” tarot card. I love Wood’s work anyway and this is such a strong image, just glorious in woodcut style monochrome, that I would definitely have it as a poster or a t-shirt.

So, if you’re still in two minds about whether or not to back the Griff Gristle Kickstarter to get your hands on a copy of The Siren’s Song, let me make it easy for you. Do it and do it now.