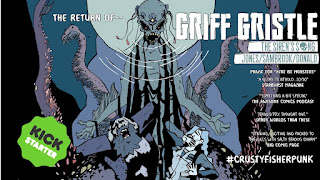 Today heralds the Return of the Crusty Fisher Punk! The highly anticipated follow up to 2016’s critically acclaimed Here Be Monsters, Griff Gristle is back in a brand new adventure called The Siren’s Song, which hits Kickstarter today...

Those monoliths of Madius Comics, writers Mike Sambrook and Rob Jones along with artist powerhouse Rory Donald are back to bring you more seabound tales of supernatural horror and intrigue.

Griff Gristle is our only protection from the nightmares of the deep and it seems as though the nightmares are rising. Griff, vulnerable after the recent loss of his wife and in unchartered territory with a newly found acquaintance, is trying to unravel the increasing intensity of unexplained maritime occurrences in the area. Missing boats, unsettled spirits, underwater churches and impromptu exorcisms were just the tip of the iceberg and you won’t believe what’s coming next. After putting an end to the occurrences in Charlsberg, Griff and Justine have followed a lead to a cruise ship that is carrying some unauthorised and highly concerning cargo. Buckle your seatbelts for rough waters, it’s time to hear THE SIREN’S SONG!

Who are the children of the waves and what do they want?

Don’t worry if you’re a brand new reader as care has been taken to make the issue as new reader friendly as possible and everything you need to know will be explained in the book. So if you want to jump right in with issue 2, you can! Annoyed you missed out on the first issue, well FEAR NOT, brand new reprints of issue 1 are on offer along with issue 2 as a tier on the campaign. The Kickstarter also features tiers that cover everything from digital PDFs, right through to T Shirts, original art and all sorts of exclusive goodies.

After two successful Kickstarter campaigns, Madius Comics is confident they can deliver another high quality product and, having had a sneak peek (read Susan’s spoiler free review) SO ARE WE. Yes, The Siren’s Song is already completely finished. It is written, drawn, coloured, lettered AND edited RIGHT NOW, so there will be almost no wait between the campaign ending and the book sitting in your hand… And, believe us, you will want it as soon as you can get it!