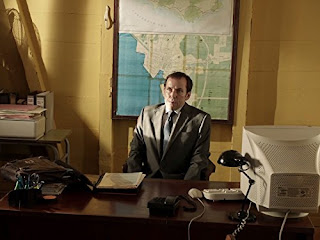 As with many television shows in the last two decades work has prevented me seeing them as they air, I end up so far behind everyone else that I inevitably don't bother watching at all. Instead, I leave it a few, sometimes many, years and then binge a box set or stream a show on various online services. I come at these shows fresh, no spoilers on social media as everyone else watched them years ago and I've found I enjoy television more this way. One of these shows that everyone seemed to love at the time was Death in Paradise, so I've spent the last two weeks locked away with six seasons on DVD and I'll be honest, it's a bit bloody good!

The basic 'fish out of water' premise whilst not new seems refreshing with a cast that looks like they have really bought into the process and the Caribbean setting makes for some wonderful scene stealing when you come across the odd episode that isn't maybe as clever as a previous one. Ben Miller kicked us off as Detective Inspector Richard Poole, brought to Saint Marie (Guadalupe plays the part of this island) to solve the murder of a fellow law enforcement officer. After successfully finding the killer he is made, against his will, to stay and run the Honoré police force by Commissioner Selwyn Patterson (the wonderful Don Warrington). Poole misses England, hates the heat of the Caribbean, longs for a decent cup of tea, and is pretty much the quintessential grumpy Brit abroad. Miller is perfect and channels, well, me and my dad if I'm honest, as he battles lizards, what seems like an irrational fear of sand, and the ever changing weather of Saint Marie eventually succumbing and going from uptight to relatively comfortable with his team of Officer Dwayne Myers (Danny John-Jules), Officer and eventually Sergeant Fidel Best (Gary Carr), and his partner Detective Sergeant Camille Borday (Sara Martins), whose mother, Catherine (Elizabeth Bourgine), runs the local watering hole Catherine's Bar. The unlikely group with their sometimes unconventional methods just work really well and crime is cleared up on the island. Sometime later, series 3 episode 1, Poole is murdered at a small party amongst some old friends from university in England and Detective Inspector Humphrey Goodman (Kris Marshall) is drafted in to solve the case before coming the next fish out of water seconded to the Honoré police force. 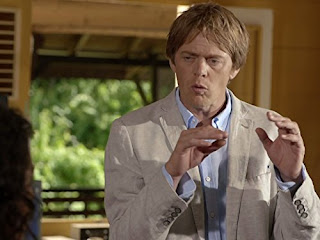 Marshall, as he needed to, played the DI role differently to Miller. He seemed to channel Hugh Grant and that foppish ‘oh golly good gosh’ spin on being a Brit and whilst at the beginning I found that a little annoying eventually his almost Columbo way of joining the dots and explaining how a case has unfolded to the gathered suspects won me over. He had his own battles mind you. He thrived in his love of Saint Martin and thirsted after more of the cultural aspects of the Caribbean than his predecessor but his wife left him, then begged for him back, he fell for DS Borday but could never tell her and she ran off to Paris to be an undercover detective, and he eventually fell for Martha Lloyd and after his motorcycle chase up the Saint Marie runway after Martha’s plane didn’t work he eventually found her when the team followed a case to London, deciding to stay and make a life with her instead of returning to the island. He was then replaced by Father Ted’s sidekick Ardal O’Hanlon as DI Jack Mooney. Whilst Mooney’s part in the show is relatively new and it will take the seventh season if it's made for me to make a judgement, so far I am quite impressed. O’Hanlon’s obvious comedic timing is still there but his character has moved to Saint Marie with his daughter after the recent death of his wife so the emotions of loss are also prevalent. His style as a detective is different again, the Clouseau type stupidity mixed with a real devious streak keeps both his team, now consisting of new officer J.P Hooper (Tobi Bakare) who had been introduced earlier in Marshall’s reign, and DS Florence Cassell (Joséphine Jobert) who had been promoted from uniformed sergeant to DS as Borday’s replacement, and the suspects on their toes at all times. It’s early days but it doesn’t seem that Death in Paradise is weakening over time when it comes to its core stars.

The episodes are a who's who of British television and whilst each case is unfolding in front of you, you cant help but play the ‘where do I know them from?’ game. Stars from soaps, most of the team from Hustle, Spooks, Casualty, Cold Feet, even Frank Spencer’s wife Betty makes an appearance, bring back wonderful memories of a wasted life in front of the box at the same time as I am being entertained by continually wasting my life in front of the box. The direction, writing and casting is top drawer and the team behind the scenes need to feel proud of all they are achieving with this show. Which leaves me with my final thought…

We need to talk about Danny John-Jules more! We need to cast Danny John-Jules in more things! The man is an incredibly underrated actor that deserves more public acclaim than it seems from the outside at least he gets. His lovable rogue portrayal of Dwayne is full of facial movements and physical tics that act in a way that any dialogue on a page would unable to match. He steals most of his scenes, which is quite the achievement when you think he is only in them briefly, and when he does get the starring role, namely in A Personal Murder about Dwayne’s best friend telling him from the grave he was murdered, he shows such a range from the emotional to the dramatic that it's hard to remember that this is the guy who plays Cat in Red Dwarf. A Personal Murder showed a side of John-Jules that the whole world deserves to see and it's surprising that with this level of performance in his arsenal doesn’t see him in more roles of a serious nature, or on more award shows as a recipient.

The star of Death in Paradise’s ever changing landscape is the one man that has been there since the very beginning.