Book – The Company: A Novel of the C.I.A 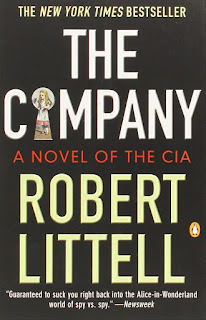 Steve Taylor-Bryant immerses himself in the Cold War as he takes on Robert Littell’s clandestine spy thriller...

I love a spy book. The secrets gathering genre is possibly my favourite and is awash with classic titles by experienced and famous authors. Le Carre, Deighton, Fleming, Greene, Ludlum, the list is nearly endless, and I have read an awful lot of titles by the guys I consider to be the best. I had not until this point though read anything by Robert Littell, so decided to start with The Company: A Novel of the C.I.A which, considering its 800+ pages, was a daunting task. It’s about three times longer than The Spy Who Came in from the Cold, the Le Carre title I had just finished. What if I didn’t enjoy it? I needn’t have worried as The Company is as epic as it is big.

The Company tells the story of The Cold War, from both the American side and the Russian perspective and spans decades from 1950’s Berlin Base to the mid 1990’s and an evolving intelligence network. Mixing in the real life people with the fictional, you never really know what’s real and what’s not until you’ve digested the entire novel. From recruiting key characters for the C.I.A, Jack McAuliffe and Leon Kritsky straight from the Ivy League school, and the story of their Russian exchange student, Yevgeny Alexandrovich Tsipin, who goes back to Russia to be trained in deep cover by the KGB, comes the basis for a tale. It gives you the characters to root for and the enemy to despise key to any spy genre novel and allows for some operational stories to unfold throughout the years that make any Cold War book work. However what Littell does that many others have tried and failed to do is that he mixes in the real, the actual players of the espionage chess that unfurled over fifty some years. The Head of The Company’s Counter Intelligence Unit, the spy of all spies if you will, James Angelton, codename Mother, plays as big a part of the novel as the fictional agent Harvey ‘The Sorcerer’ Torriti and the use of such an iconic person in the intelligence field adds a real edge to proceedings. You can learn how Angelton’s paranoia and witch hunts for Russian moles within his organisation nearly destroyed the C.I.A in a non-fiction book but to have his idiosyncrasies and character traits, his relationship with the British spy turned defector and double agent Kim Philby, play out on such a grand scale and sweep along with it the stories set in the fictional is just stunning writing of the very highest order.

As the decades move on, real life heads of the intelligence agency are as involved with proceedings as the made up characters are and Presidents are not just named for timeline reasons but come alive in meetings with the department heads. Jack Kennedy and his brother Bobby play a huge part in Cold War history and The Bay of Pigs fiasco and, right there on the pages of the book, are the meetings that took place in the run up and aftermath, interwoven with the fictional storyline that accompanies the historic event. Johnson also gets a look in, and later in the novel Reagan and his unique way of not actually answering a question play a large part.

I haven’t read anymore Littell yet but I will. I doubt though that any will match The Company for adventure, realism, political intrigue and character, because I genuinely believe, as a book about the secrets of the two super powers of that era, The Company will never be bettered.