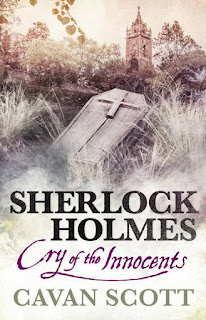 From bestselling author Cavan Scott comes a brand new Sherlock Holmes novel as Titan Books announce the publication on 19th of Cry of the Innocents...

It is 1891, and a catholic priest arrives at 221b Baker Street, only to utter the words “il corpe” before suddenly dropping dead.

Though the man’s death is attributed to cholera, when news of another dead priest reaches Holmes, he becomes convinced that the men have been poisoned. He and Watson learn that the victims were on a mission from the Vatican to investigate a miracle; it is said that the body of eighteenth-century philanthropist and slave trader Edwyn Warwick has not decomposed. But should the Pope canonise a man who made his fortune through slavery? And when Warwick’s body is stolen, it becomes clear that the priests’ mission has attracted the attention of a deadly conspiracy...

Scott crafts an intriguing mystery, one that drips with secrets and suspense. The perfect addition to Titan’s Sherlock Holmes library, Cry of the Innocents should enthral fans of the famous detective and transport them back to the murky depths of Victorian England.

ABOUT THE AUTHOR: Cavan Scott is a Sunday Times bestselling British writer of novels, comics, audio-dramas and non-fiction books. Best known for his work on Titan’s Doctor Who: The Ninth Doctor, Supremacy of the Cybermen and Vikings comic series’, he has also written for a number of high profile series including Star Wars, Judge Dredd and Warhammer 4000.