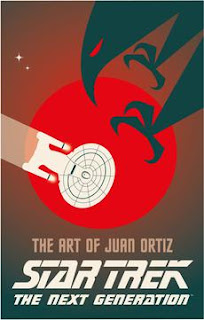 Susan Omand engages with Star Trek, The Next Generation: The Art of Juan Ortiz thanks to Titan Books...

Thirty years ago today the USS Enterprise NCC-1701D hit our screens in the very first episode of Star Trek: The Next Generation (hereinafter known as TNG because I’m not typing all that out in full the whole time). The show went on to great things, exploring strange new planets, seeking out new life and new civilisations and boldly going where no-one had gone before for a total of seven seasons, 176 stories (2 were 2 parters). This was quite a feat for several reasons, not least that the original 1960s series (with Captain Kirk et al) was cancelled after 3 seasons and 79 episodes because of rubbish ratings. To be honest, it was touch and go for TNG as well for a while, as you’ll know if you’ve seen the documentary Chaos on the Bridge, with the axe set to fall after only 2 seasons but true Star Fleet tenacity won out and the series just got better and better, garnering the rabid fandom that all the Star Trek series have today.

And it’s those rabid fans that this book is for. The artist Juan Ortiz, a self-confessed “rabid fan” started out with an amazing notion... what if each of the Star Trek TNG stories was a film in its own right? What would the film posters look like? This book is exactly that, a collection of 178 imagined film posters (the 2 parters are treated as paired but separate posters) bookended by a short interview with the artist explaining some of the background to his concepts at the start and a useful list of episodes at the end. To be honest, the interview felt a little stilted and didn’t give as much insight as I had hoped. Perhaps a more flowing written foreword or introduction, even by someone other than the artist, would have worked better. However, the words are not why you buy this book, it’s the posters.

Yet again, Titan Books has knocked it out of the park on this one, cutting no corners on quality, with the book a mahoosive 27 cm x 37 cm (10.5” x 14.5” for us auld yins) and heavy gauge paper showcasing the artwork in all its glory. It’s interesting that, in the interview, Ortiz says that he didn’t want to “go retro” with the posters because I was reminded of the work the great Saul Bass did with some of the Hitchcock posters with much of his work, especially with his use of grids and circles. I also liked his use of collage in some of them, mixing in tinted photos with his own graphic artwork, and his use of negative space, using the area around his drawn shapes to suggest another object, was intriguing and had a very 60s feel to it, which is slightly incongruous for an 80s/90s series but I really liked it. If you look at the posters chronologically, he definitely has a recognisable style edging far more to the graphic design side than painterly and each images stands on its own very well without needing explanation. I must admit, after leafing through the posters, I sat for hours with IMDb open on the computer to find the episodes that I had enjoyed watching the most (I’m rubbish with titles) then looking the posters up in the book. It’s definitely a book to dip in to and give each standalone poster your full attention, as you will find impressive attention to details, with Ortiz picking less obvious objects to concentrate on for each episode while still managing to capture the essence of each story in a single, striking image.

So if you’re a fan of TNG, I recommend that you too spend ages poring over these posters with a nice cup of tea. Earl Grey, hot, obviously.