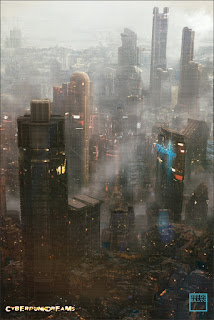 cyberpunkdreams promises you "Cincinnati, Ohio, like you’ve never seen it before" in Cincinatti Stories, a new collection of short stories currently crowdfunding on Kickstarter...

"And that, my friend, is how the great United States of America ended up as a bunch of separate third world countries, and why you're living in a slum.”

The aliens have not arrived. The singularity has not happened. No big event or technological discovery has shaped our future. It's a slow hellslide into a world where tales of sleaze, debauchery and hustle are forged. Gangs? Drugs? Sex? Violence? You couldn’t escape them even if you wanted to.

cyberpunkdreams was originally conceived in 2003 as a group writing project, where diverse authors contributed stories all set in the same world. This writing method evokes the exploration of many more themes, settings and characters than any one author can achieve on their own. Although this vision has persisted, cyberpunkdreams has evolved over the years to spawn several different manifestations.

The rich dystopian world of cyberpunkdreams will be unveiled through a series of independent projects, including RPG and board games, but starting with Cincinnati Stories, an illustrated collection of 15 short stories, currently on Kickstarter. 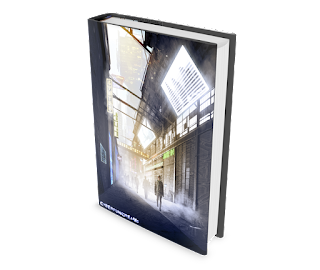 The United States is broken. Torn apart by wars of secession, ecological disaster and political conflict. The mid-west, poisoned by biological and chemical weapons, has become a barren, infertile wasteland. The cities, straining under the weight of the ensuing refugee crisis, have succumbed to rampant corruption and urban decay. On the border of order and chaos, civilization and barbarism, lies the city of Cincinnati.

All the usual perks are available, including the book in 3 different formats, postcards, badges prints and T-shirts. But you can also become part of the story itself, with opportunities to create your own character dossier or have your cyberpunk portrait painted and included in the book.

The creators have released one of the stories, Gangland, as a taster to their world, which you can download from the Kickstarter page.

Watch the video to find out more:

cyberpunkdreams is a dystopian world conceived by cyberpunk author Rob Chant. Based in Cambridge, UK, cyberpunkdreams is a project by Late Night Games, Chant’s vehicle for releasing his world into ours. A fan of Neuromancer and Blade Runner from an early age, Chant studied Physics with Computing and readily admits he’s never had a proper job. While Cambridge may not be the most cyberpunk city on the planet, Chant’s work is scientifically detailed enough to fit him right in.