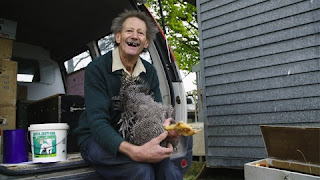 Out in cinemas on 29th, Susan Omand squawks about the documentary Pecking Order...

Join members of the 148-year-old Christchurch Poultry, Bantam and Pigeon Club in the lead up to the NZ National Show, as they battle history (and each other) in their quest for glory. Audiences will be introduced to an endearing and eclectic group of ‘chook fanciers’, each hoping to take away the top prize, including Doug the determined Club President, Rhys the young upstart, Sarah the chicken whisperer, Ian the exacting judge, Mark the voice of reason and Brian the lovable champion. Pecking Order is a hilarious, unique, and heart-warming slice of Kiwiana which is sure to delight and surprise audiences of all ages.

Pecking Order is not a documentary about chickens. Don’t get me wrong, chickens are captivating creatures. I come from a crofting background and farming heritage, so there were always hens in the yard and one of the must-sees when we went to the Highland Show was always the poultry tent. So I was definitely interested to watch the breeders getting their prize fowl ready for the show days and I got engrossed in the competitive edge as the documentary followed several individuals from selecting their best birds and getting through the smaller local shows in New Zealand as they try to win a place at the national finals. But the film is about more than that.

There are universal truths here. If you have ever been a member of a recreational club, sports team or hobby group of any sort, you have, or will be, part of the committee at some point. Pecking Order proves that, no matter what the special interest of the club, committees are the same the world over. There’s the old guard who stubbornly hog all the important posts on the board and refuse to see why anything has to evolve in the club to get new members involved because it’s been like that for the past 50 years and The Board are happy so why change it. There’s the over-enthusiastic newcomers who bounce in with a will to take over and change everything to "make it better", volubly enforcing their ideas, causing ructions and getting everyone’s back up. There’s the quiet ones who have got as far as being a committee member and have good ideas but do not want to go any further with them because they have a fear/respect of the “elders” and don’t want to rock the boat. And there’s those that just want to get on with the fun bits of the club and pursue their hobbies rather than deal with any of the organisation behind it. Add to this the fact that another club, the pigeon fanciers, has had to be amalgamated with the poultry club for financial reasons and all hell breaks loose at the meetings. There are chicken coups, poultry power grabs and good looking chicks dancing on the committee room tables, with highly engaging characters and fraught situations documented by film maker Slavko Martinov in ways that are eye-opening, moving, enthralling and often laugh out loud funny.

So no, this isn’t a documentary about chickens. It’s about the nature of people, politics and your place in the Pecking Order.