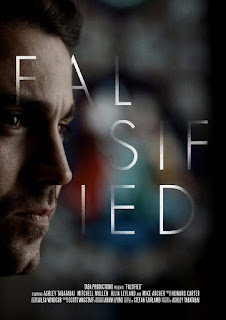 After over 30 years of searching, Henry finally believes he has found the son who was stolen from him at birth during Spain’s stolen babies scandal. Now in London, he is trying to find his long lost son who he believes is Javier. Will he force Javier to reopen this painful chapter of his life, or will Henry leave never knowing his son?

Falsified is inspired by the true events around the 'Los Niños Robados' scandal where babies of Republican parents in Spain, adults who were jailed or assassinated in the Franco era, were kidnapped and sometime trafficked with forged papers. Now, by any stretch of the imagination, this is a hard hitting subject for a short film where there is not a lot of time to build character back stories but it very sensitively handled. The film is mostly a two hander as Henry (Mitchell Mullen) tries to persuade the man he believes to be his son, Javier (played by the writer/producer and co-director of the film Ashley Tabatabai) to believe the story he is telling and the on screen dynamic between them works very well with interesting camera angles and sharp direction adding to the depth of the film. I also really liked the plot device of the answering machine as it provided a slight film noir feel as a voice over. However, although the story is well resolved in its limited running time and you are left with that hit of emotion, I felt that even more could have been gained from leaving one of the ends undone, I won’t say which because it is a spoiler, so that the viewer is left wondering – as it is, it’s a bit too tidy/clichéd for me. But that thought may just be me.

One thing I think we can all agree on though is the superb cinematography of Adam Lyons. It is an absolutely stunning film to look at. The colours, the lighting, the reflections, especially in the church, it’s just beautiful and highly emotive and gives the film a polish and professional artistry that is often missing from shorts. So, even if you’re not drawn by the subject matter, the film is worth watching just for that.