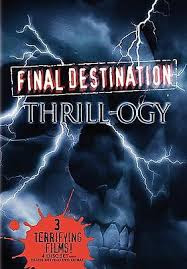 VentSpleen has been unpacking some of his long neglected DVD collection. First out of the box is the 'thrill-ogy' (marketing off day or inspired moment of genius?) that makes up the first three Final Destination films...

Ever since I can remember, some of the finest horror films have featured numerous teenagers and their messy demises at the hands of some lunatic with a knife or other such sinister apparition. Friday the 13th and Nightmare on Elm Street are both fine examples of the fun that can be had slaughtering stupid teenagers. You can have too much of a good thing though and, by the mid nineties, it was all getting a little tedious (personally I blame Scary Movie - parody of a parody) with Hollywood not knowing when to stop, as usual. By the time we arrive in 2000 the genre needed a rest and it's probably this reason that Final Destination gets overlooked by some. On the surface it looks like just another bunch of teens meeting their ends in an unpleasant fashion, but there is so much more going on than just original death sequences.

The brilliance of the Final Destination films can be found with the very straight forward premise that lies at the heart of them. Annoying smug teen gets a vision of a horrific and very bloody accident and totally freaks out, causing some of those marked for death to avoid being splattered. Death, not to be shown up by a potential adult in waiting or have his plan wrecked, goes about reacquiring his prey. The aforementioned teens run around trying to avoid being squished and work out how to outsmart the grim reaper. What follows is the slow realisation that they all die in the order they should have done and Death can be very, very inventive when he's riled. The first and third film are directed by James Wong with the second helmed by David R. Ellis and it is no accident that the Wong directed outings are my favourite (he of the high octane and large of spectacle vision.)

The death sequences are impressive in that they involve a set up as Death wants to hide his handiwork and make the fatalities look like accidents. Both Ellis and Wong play with the rules wonderfully and wrong foots the audience with the actual dispatch being teased for several scenes. In latter films the build up can take a torturous amount of time and the films just began to get too clever for their own good. I am on record as saying that the motorway pile up sequence at the beginning of the second film is one of the most graphic and imaginative I have ever seen. The relatively unknown cast of each film deliver performances which are hugely enjoyable and keep on the right side of annoying without actually involving you caring what happens to them. Death is the star here and the teens mere cannon fodder, as they should be. So we have death by nail gun, death by tanning booth, death by various spikes and (my favourite) death by pane of glass. Final Destination never takes itself too seriously and isn't remotely scary, it's just a lot of fun! Honourable mention to the always brilliant Tony Todd as the creepy Mortician (1 and 2) who explains Death's design in all its beauty.

If you missed Final Destination first time round then I recommend you invest in copies of each of them. Original and entertaining, Death is inventive and has a black sense of humour you will love!