Film - The Road to Mandalay 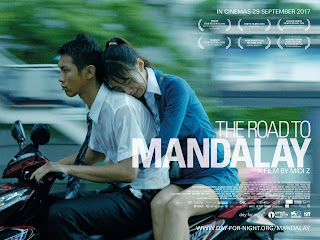 Tony Cross puts his best foot forward and heads for The Road to Mandalay, in cinemas from Friday...

I’m sitting on the tube on the way home trying to work out what I think about the film I’ve just seen. This isn’t necessarily a bad thing. Having food for thought is unusual in a world where a lot of films are cinematic fast food. Perhaps it was just the ending that threw me. I wasn’t sure how I expected it to end but it wasn’t like that.

This is a film about normal people trying to improve their lives. People who have fled Myanmar to try and build a better life in Thailand. People who don’t want to be pop stars, they want to have a job so they can provide for themselves and their extended family. They don’t want to make it to the big time, they just want a roof over their head and the papers that will let them go to the big City. It’s a film about dull jobs in terrible work places and making then best of it. It’s about men and women. I’m not sure I’d call it a love story. For a love story, you need two people to be in love, eventually. Here I think the love is really one way.

Men are surprisingly bad at falling in love with the wrong women and inflicting pain on themselves and the women concerned as a result. Clive James once said: "Men who fall in love easily & often should do the world a favour of not taking their own passions personally. Above all, they should do that favour to womankind." And there’s an element of this in ‘The Road To Mandalay’. Perhaps this is also a film about the strength of women and the weakness of men. It’s certainly Lianqing (Ke-Xi Wu) who shows the most gumption and the determination to get away from where they are and move on. It’s Lianqing that talks about travelling. Guo (Kai Ko) seems more content where they are and looking for a comfortable status quo (or even looking backwards to a return to Myanmar.)

Perhaps it isn’t about any of these things at all. Perhaps it is just about surviving as a refugee in a world that hates refugees but needs them to do full, shitty jobs that capitalism needs to provide us with cheap consumer goods. Perhaps this is a film that reminds us that these people are as human as we are. Not just statistics to be tutted over when watching the news. That these people are as much our responsibility as the people we know and love. They’re not invisible. They’re not worthless. And that it illustrates the wholes system of gangsterism and corruption that we benefit from. It’s just we choose to see them as the problem, not us.

It’s beautifully directed by Midi Z. There are long sections with almost no dialogue, just the natural soundscape. I saw Melville’s ‘Le Samouraï’ recently and he too has a powerful way with silence. It’s under used in modern cinema, where noise – either music or stuff exploding – seems to be the default. Silence is an incredibly strong tool in a film director’s toolbox. It gives time for things to breath and to give us time to see people thinking and reacting.

The two main performances should be praised. There’s not much here in the way of histrionics but there doesn’t need to be. Just as those British black and white films we mock in a friendly way there is something genuinely powerful in someone trying to hold onto themselves in the face of an emotional wave that letting it all hang out sometimes loses. There’s power in holding back.

Ke-Xi Wu is superb as Lianqing. There’s an odd scene near the end involving a lizard that I won’t spoil but manages to tell the tale it is trying to tell brilliantly without having to be spelled out and it is as strong as it is because Ke-Xi Wu. But, I shouldn’t undersell Kai Ko either.

So, having written all of that and taking my mind out for a little walk I must say that it is worth watching. It’s a well-told story about contemporary issues that manages to stay personal. It also makes me want to watch more films directed by Midi Z who seems like a man with something to say and the ability to say it.

THE ROAD TO MANDALAY is in UK cinemas 29 September, find out more HERE