TV/Book - The President is Missing 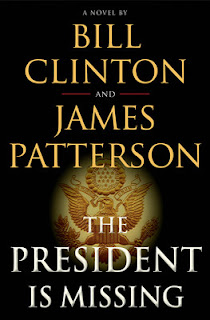 Showtime has announced it has acquired the rights to adapt The President is Missing into a series...

Based on the highly anticipated novel by President Bill Clinton and bestselling author James Patterson, set to be published in 2018, the series will tell the startling story of a sitting U.S. president's disappearance, with the level of detail that only someone who has held the office can know – generating a powerful, one-of-a-kind thriller. Though fictional, the story brings to life the pressures and realities of the most important position in the world.

"Bringing The President is Missing to Showtime is a coup of the highest order," said David Nevins, President and CEO, Showtime Networks Inc. "The pairing of President Clinton with fiction's most gripping storyteller promises a kinetic experience, one that the book world has salivated over for months and that now will dovetail perfectly into a politically relevant, character-based action series for our network."

The book itself promises to be the biggest and most spellbinding novel of 2018. President Clinton and Patterson are a formidable writing duo, and their collaboration marks the first time an American President has ever co-authored a thriller. The result is a gripping tale of power and betrayal, with a unique perspective on the pressures and stakes faced by a sitting president.

"I'm really enjoying writing this book and working with Jim," said President Bill Clinton. "And I can't wait to see Showtime bring the characters to life."

"The White House is such an exciting world to explore and is made even more so with the unique insights of a former President," added Patterson. "Rich storytelling opportunities for this series abound."

The 42nd President of the United States, Clinton has written bestselling nonfiction books including My Life; Back to Work: Why We Need Smart Government for a Strong Economy, Between Hope and History; Giving: How Each of Us Can Change the World; and Putting People First: How We Can All Change America. The President is Missing is his first novel.

Over more than four decades, Patterson has established the single-author record for most No. 1 New York Times bestsellers, selling more than 380 million books worldwide, including the Alex Cross, When the Wind Blows, Women's Murder Club, Michael Bennett and NYPD Red series. Among his works adapted for the screen are Zoo, Women's Murder Club, Along Came a Spider and Kiss the Girls. In addition to the thriller novels for which he is best known, Patterson also writes children's, middle-grade and young-adult fiction, becoming the first author to have new No. 1 titles simultaneously on the New York Times adult and children's bestseller lists.