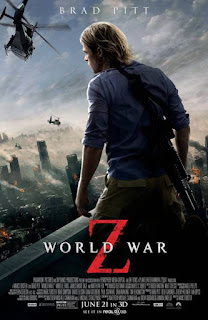 Zombies, the fictional supernatural entities that we all know and love. Not really, I mean realistically if an apocalypse was to break out, I would assume that everyone would just know what to do until the military arrives and takes care of them.

However the zombie concept does change from time to time, from "you just need to die to become one," to zombies becoming athletic and having the ability to sprint across fields with their arms waving around. What I really liked about World War Z in particular was the fact that these zombies were not only athletic and could pile on top of each other to climb over walls, but they had the instincts of any usual predator. The moment when one of the characters in the lab in Cardiff, Wales, mentioned that it made sense for the zombies to not attack those with illness, as animals would not usually do so as it would be a threat to themselves, was very intriguing and I felt that this was an entirely new take on the “zombie virus” concept.

Let's take a look at what IMDb had to say about World War Z:

Life for former United Nations investigator Gerry Lane and his family seems content. Suddenly, the world is plagued by a mysterious infection turning whole human populations into rampaging mindless zombies. After barely escaping the chaos, Lane is persuaded to go on a mission to investigate this disease. What follows is a perilous trek around the world where Lane must brave horrific dangers and long odds to find answers before human civilization falls.

So the synopsis that they have written does seems a lot like any typical zombie movie but the truth is, it's not really the zombies that us strange flesh-eating zombie lovers like about such films, in fact it's more about our desire for the characters to stay alive and the intense feeling of not knowing who is going to make it to the end of the film. This could pretty much be said for any horror film really as, to be perfectly honest, unless your some kind of psychopath, you’re going to root for the survivors.

What I loved about this typical survivors group in the film is the fact that the beginning “survivors group” is the family of Gerry (played by Brad Pitt) which made the audience root for them to survive, as most of its viewers would have a member of their family that they would care about protecting in a zombie apocalypse and it's through how we can relate to the character that we really want them to survive.

There’s one aspect of the film in which I really respect the director for, and that is the use of editing of the sound. The fact that Brad Pitt's character is presented as this character with a very good sense of hearing is conveyed to the audience perfectly through the non-diegetic sounds (noises created by something off-screen) that were edited in to sound like high pitched noises in scenes of characters feeling panic or distress, and the sound of a heartbeat conveys the shock of Brad Pitt's character perfectly as, of course, in a time of panic the audience would be focused on the sound of the heartbeat to understand the shock of the character.

Such sounds are also used to echo the singing in the Jerusalem scene in which a girl is singing with people in order to provide entertainment. The way the high pitched sound followed this was spectacular, as you could not only interpret this as being Gerry simply hearing the sound in a high pitched way, as this is how he in particular hears certain sounds, but you could also think of it (how I did) in the sense that this is what the zombies themselves are hearing and this could be seen as a glimpse into their suffering as, really, this form of zombie is like any other predator in a typical food chain, a being with the desire to hunt.

Like any film, though, it had its negatives. The main one, for me, being the fact that typically, many characters seemed to die even when it was not necessary. Of course you do need people to die in a zombie film, otherwise they're just dead beings wondering about doing nothing essentially. Also the fact that there always seemed to be very few survivors wherever the main character, Gerry, went kind of came across as if  he was way too strong because if you just have this character surviving then it kind of makes sense that he would survive with more than one person. I know Gerry had training but surely this training would help him in keeping more than one person alive at a time, right?

I just feel like there are still a few too many flaws here, as in many zombie TV shows and films, but hey, nobody’s perfect.