The Defective Inspector  finds a game that is double plus good in Orwell: Keeping an Eye On You...

There are a few games I refuse to “Let’s Play”. It’s a matter of principle more than anything else, the game’s experience is too important to project onto someone else’s screen. Orwell is one such game. You cannot sit by like an idle cinema junkie, gawking as events unfold in front of you, OH NO you must be more than a mere observer of this game, you need to be an investigator! Or in my case… A Defective Inspector. 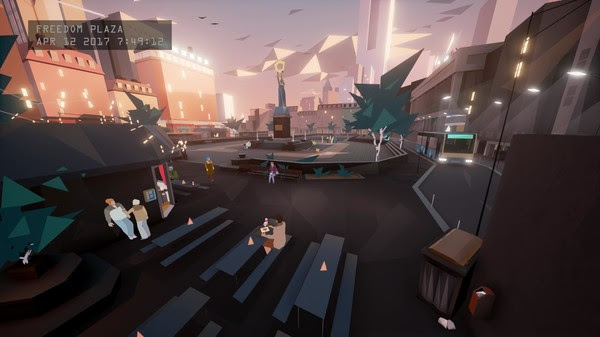 As the title may imply Orwell is a game taking roots from the book 1984, a semi-theoretical time where the omnipresent government eye is always watching. But in a strange turn of events you are given the role of the eye, you ARE Big Brother. Following a vague terrorist attack you must find clues to understand what happen, why and then deal with the aftermath of your choices. The entirety of the game takes place on a fake-desktop screen where you must find connections and links between people and events across the “Nation”. It’s rather difficult to expand on this premise without completely spoiling the whole game but there is must to do, many things to connect and always more questions to ask. Through frantic dragging and dropping you decide what is valuable information and what is not while trawling through a fair bit (but not too much) personal data. This archive slowly builds throughout the game, allowing you to make potential links before they are made clear and to some degree begin to uncover the ending before the climatic final scenes. The gameplay and premise is both admirable and clever but the true treasure comes from something a little deeper…

With games like this the story is everything. There is an entire sequence of events already played out, hiding in the coding, and you are simply dusting away the excess soil with a fine archaeology brush. This means that you are constantly telling/living through a story worthy of Orwell himself. It has disturbing parallels to modern day events, hinted backstories which are distraction to the final goal(s) and more than enough useless information to make you feel like a real defective. It’s no wonder I love this damn thing so much! It even has moments where you are pushed to provide information, sometimes with a time constraint, to add sporadic tension to events! Oh I’d love to tell you more but… I’d be ruining all the fun. So, I guess I’ll need to stick to talking about the surface appeal. 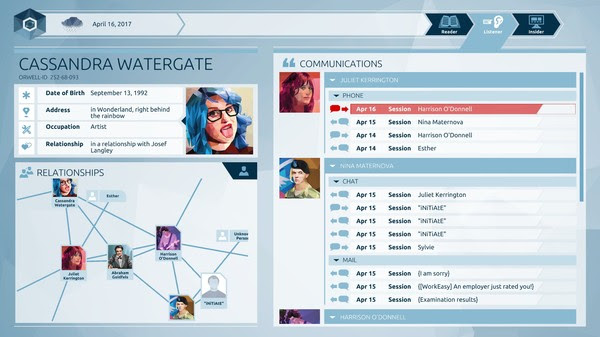 Beyond the plot the aesthetics, both audio and visual, are… Pleasing. It’s not revolutionary but everything about is very clever and geometric. Consistently each character is given this strange newspaper collage persona, likely to give a metaphoric and vague impression on the individuals. It’s a beautiful touch to an already clever game. The desktop display looks and feels like a PC program and the appropriate messages which makes the whole process feel very immersive and “life-like”. The music is ominous and foreboding to accompany your legal but immoral activities while occasionally switching style for dramatic events. Again, it won’t win any Oscars for composition but you need to nod at the little touches.

I didn’t play this game until 14/9/2017, almost a year after its release. I state for the record now I was a fool to wait this long. The game is exceptional in almost every way I can think of and frankly I am upset with myself for waiting this long to talk about it. But I am welcomed with the news that Season 2 of Orwell is “coming soon” and I can at very least yell to the roof tops that the best is yet to come. Clever games like this don’t come often, we NEED to support them.

So play the demo! Join the social media groups! Purchase the game! Become part o-… Wait a second. Is Orwell encouraging me to supply information that could be used… By me? Against me? Oh this may take a moment to process…