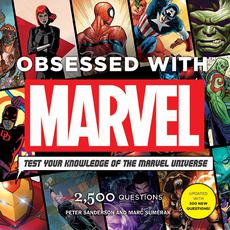 Do you have a Marvel fan looking for something to while away the darker nights? Or even starting to think about the dreaded Christmas shopping? Titan Books may have the answer (and the questions)...

Think you know MARVEL Comics? Think you’re the best there is at what you do? Test your knowledge and level of geek with questions covering the entire history of MARVEL Comics. Illustrated throughout with authentic MARVEL comics artwork featuring all of MARVEL’s most famous characters, including the Fantastic Four, the Avengers and the XMen, this book packs a Hulk’s Smash.

Obsessed With Marvel packs 2,500 trivia questions on the Marvel Universe comic books in a single volume, illustrated with some of the most memorable comic artwork in the archives. This new edition includes 300 new questions taken from the most popular Marvel comics released in the past decade. This comprehensive yet compact book will challenge even the greatest Marvel comics fan! 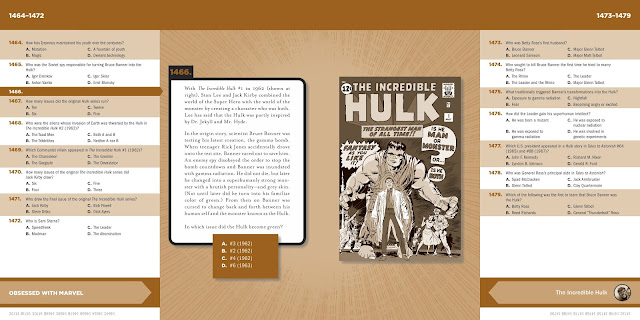 Pete Sanderson is a comics historian and critic, who was Marvel’s first official archivist. He is the author of the bestselling X-Men: The Ultimate Guide and co-author of The Marvel Encyclopedia and Marvel Chronicle. Peter was also one of the main writers of the first four versions of The Official Handbook of the Marvel Universe.

Mark Sumerak is an Eisner Award and Harvey Award-nominated comic book writer and editor. Over the past decade and a half, he has contributed to countless tales of today's most popular characters, including the Avengers, Spider-Man, the Fantastic Four, and the X-Men. His work has been published by Marvel Comics, DC Comics, IDW, and many others.


Obsessed with Marvel is out now from Titan Books