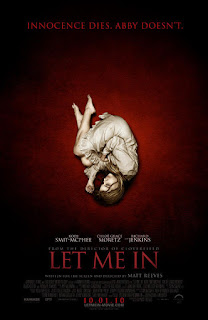 It's DAY 14 of David Ames' Vampire themed Hallow-vent Calendar as he counts the days until our favourite spooky celebration of the year - HALLOWE'EN! Behind today's window is Let Me In...

After yesterday's change of pace, once more we are going back to the same story to discuss one more film based on John Adjvide Lindquist’s masterpiece, Let the Right One In. After the success of the 2008 Swedish film of the same name, American studios acquired the rights and, as they are wont to do, decided to remake the film for an American audience. Normally I would scoff at this in a very pretentious, film school way and refuse to watch the film but as this is one of my favorite novels as well as movies, I had to give it a shot. Therefore, the day the film was released, I ventured forth to the theater to experience 2010’s Let Me In.

The film once again follows the same plot as I have discussed in the previous two articles, although this film does touch much more heavily on the pedophilic aspect of the the caretaker and Abby‘s (Eli in Let the Right One In) relationship. Also, the major twist about Eli is completely disregarded in this film but not a lot is lost because of this change.

Matt Reeves (Cloverfield, Dawn of the Planet of the Apes, War for the Planet of the Apes) directs an all-star cast of actors and actresses who deliver a film that, as rare as this is, delivers something that is comparable to the original. I can’t say that it is better but I can say that American audiences may actually enjoy this film more because ther eis a lot lost in translation between American and Swedish culture and Reeves deals with those differences beautifully. The music is haunting and creepy while also being touching and those notes, written by Michael Guiacchino, fall perfectly in place with the film Reeves has created.

Kodi Smit McFee (The Road) delivers a wonderful performance as the incessantly bullied Owen, handling the role with the same power as Kare Hedebrant in the Swedish version. He is sad and beaten down but also is able to fully exhibit those early signs of psychosis brought on by depression. He is able to portray the lost child striving for acceptance from both his peers and his parents, the latter of which use him as a bargaining chip in their ugly divorce. Richard Harris plays the caretaker with spellbinding sadness and loss. His ability to act as both provider and predator create a wonderful duality in the role.

Chloe Grace Moretz, who portrays Abby, gives what may be her best performance. In her young career she has been able to play a myriad of roles (Kick Ass, The Amityville Horror, Dark Shadows) but nothing is as emotionally powerful as her turn as a tortured, lonely vampire without a person who really understands her. She is brutal and touching and vulnerable in the same way Lina Leandersson is in the original. This is truly one of her most remarkable roles and she pulls it off flawlessly.

The only bad element to the entire film is the random CGI that appears when Abby kills someone. Instead of letting the film remain low-fi and effective, they chose to include CGI vampire Abby, slaughtering people from the shadows. This pulls the viewer out somewhat, but this is a small fault.

Once you have watched the original, do yourself a favor and check out Let Me In. It is done incredibly well and does a great job of achieving the same melancholic yet strangely hopeful feeling of Lindquist’s work in the same way as its 2008 predecessor did.