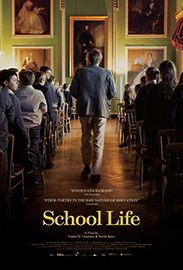 Steve Taylor-Bryant heads to boarding school as he reviews the documentary about life at Headfort School in Ireland...

I didn’t really know what to expect from School Life. I have never attended boarding school myself, although I had three primary schools and three secondary schools in two countries as a child, so my experience of education is different from many views, and I am the son of a teacher, so my thoughts on school life can be quite skewed at the best of times. However, I sat to watch the film from Neasa Ní Chianáin and David Rane as open minded as possible in case it was one of those films that brought up divisive political arguments about how we educate our youth. I needn’t have worried, what I viewed instead was something beautiful, something that showed a real humanity from both sides of the education spectrum, teachers and children, and along the way I got some laughter as well as a lovely warmed heart.

Synopsis - This very funny and yet poignant observational documentary, which was an audience favourite at Sundance in January, follows two 'prep school' teachers, John and Amanda Leyden, who have become legends teaching Reading, ‘Rithmetic and Rock ‘n’ Roll to young pupils at Headfort, an enchanting 18th Century Hogwarts-like boarding school – the last of its kind in Ireland. The pace at the school is hectic and the mood infectious as this eccentric, chain-smoking, and very droll British couple, who have lived and taught for 46 years at Headfort, work their magic in hilarious fashion on fertile young minds. The film reflects a unique kind of warmth and fondness that existed between tutor and ward in years gone by, a genuine love of all that makes childhood so precious. But, in School Life, for both the pupils, moving on from the last days of their childhood, and the teachers, facing the end of their careers, leaving is the hardest lesson to learn.

All documentaries should leave you having learned something about its subject matter and I suppose the main lesson I learned was that they don’t make teachers like Amanda and John Leyden anymore, and that is a shame for all pupils worldwide. These were two teachers that were more than strict purveyors of knowledge that stand in front of a chalkboard, they showed themselves to be caring confidants for the children, they were deeply embedded in the school’s history having been teaching at Headfort for over forty years, but most importantly and possibly most old fashionably, they seemed to really enjoy not just imparting wisdom on the children, they enjoyed their company, they loved not just their jobs but the young minds they came into contact with on a daily basis. As the son of a teacher I saw every emotional element of being a teacher over the years as my mother went from young and enthusiastic, full of dreams of changing the world by educating the youth at her disposal, to embittered and worn down by government oversight and politicians that had no clue how to run such an important department as the Education Department. I saw these changes both at home and in the classroom and I breathed a sigh of relief as my mother was finally pensioned off, and I got back the woman I loved instead of the empty shell she had become. I just presumed that all teachers in all schools were the same but my heart was warmed watching Amanda and John in action. They obviously had a responsibility to educate and every school, no matter where it is, has some kind of curriculum it has to follow, but with Amanda and John Leyden there is a comfort in watching them work. We all have that teacher we were fond of for whatever reason, and I think the older you are the more fond the memories, for me it was Miss Eaton my history teacher, straight from teacher training college full of enthusiasm for both the subject matter and having her first class of kids to entertain. I saw that fondness I have for Miss Eaton in the eyes of the children that were taught by the Leydens. Those children will grow up and go along their own journeys but you know when they are forty two years old and are sat watching something they will have the same happy memories come flooding back to them that I have experienced watching School Life.

Teachers, schools, education, these three things get a lot of bad press worldwide in this day and age and maybe a lot of it is warranted but what School Life showed was that in every walk of life there are people in positions of responsibility that completely understand what their role is, they work hard, they care. School Life is a must watch film for everyone who has forgotten how hard school was as a child and needs to regain that fondness they once had. School Life is a must watch for anyone in charge of a school whether that be a head, a politician, or a bean counter. They need to watch this film and see what can actually be achieved in a classroom when you allow teachers to have a personality. School Life is a must watch. Period.

School Life comes to cinemas in the UK from 13th October.