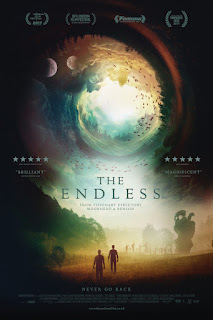 After the critical success of their 2014 genre-bending feature Spring, the filmmaking team of Justin Benson and Aaron Moorhead return with their newest feature, The Endless. Praised for their original storylines and their skill in crafting genre-mashing microbudget movies, Benson and Moorhead now make the transition from writer-directors to actors.

Struggling to reintegrate into normal society, they lead a bleak existence, finding work cleaning recently vacated apartments. They have no friends, little money, and a diet of desiccated noodles. They attend ‘reprogramming’ sessions, where they can discuss their difficulties in readjusting to society after having spent their childhood indoctrinated in the cult.

It appears however, that there is conflict between elder brother Justin, who is relieved to have left the cult for a regular, albeit tough, life, and Aaron, who yearns for the companionship, seclusion, security (and good food) that life with the cult offered. Aaron remembers less and is thus more naïve about the past than his older brother, who is wary of the cult’s insidious attractions.

Then they unexpectedly receive a parcel in the mail. It is a videotape from Arcadia Camp, the settlement where their former cult still resides. Featured on the tape is Anna (Callie Hernandez) who they recognise as their former babysitter. She is filmed reassuring viewers that they all members are happy and awaiting a mysterious event called ‘the Ascension’.

The brothers are disturbed by this sudden intrusion into their lives, but Aaron is desperate to investigate further, and uses the enigma of the tape as an excuse to plead with his brother to revisit Arcadia Camp.

Worried about Aaron’s state of mind, Justin reluctantly agrees to return to the campsite for a brief overnight visit, hoping that he will recognise the flaws in their former life for himself and be cured of his idealized nostalgia.

When they arrive, everyone is still alive and thriving, and life in Arcadia Camp appears to be continuing much as before. Hal, (Tate Ellington) the leader in Arcadia, goes out of his way to be hospitable to the brothers. They receive a hearty welcome from the inmates who ply them with a hearty home-cooked dinner and pitchers of home-brewed beer, one of the sect’s main sources of income.

Everyone in the sect has a purpose and contributes their own particular skill, which makes them feel useful and fulfilled. Clearly ‘The Ascension’ never happened, and the “crazy UFO death cult” doesn’t seem at all as bad as it had been painted.

Aaron begs Justin to stay for an additional night, and then another, trying to extend their trip, until he confesses that he wants to stay, despite Justin’s disapproval. However, odd events begin to accumulate, and soon the situation escalates into downright weirdness.

Not Anna, their erstwhile babysitter, nor Hal, nor anyone, appear to have aged at all over the years of the brothers’ absence, although Aaron puts this down to clean air and a healthy diet. Although Anna is the person on the VHS tape sent to the brothers, she claims to have no knowledge of it.

Strange incidents and odd behaviour are subtle at first, but become increasingly more bizarre. There is a heavily padlocked shed that is guarded at all times, enigmatic post-it messages are left around the campsite, and on a chalkboard there is a complex and unfinished maths equation that Hal claims will give him the answer to an ultimate question. There is a tug-of-war with no opponent, photographs fall from the sky at key moments, additional moons appear at night followed by visual anomalies - the strange occurrences multiply until they create a perplexing and unsettling puzzle. 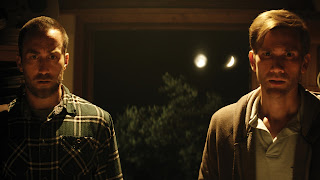 The plot of The Endless also expands on some of the themes of Benson and Moorhead’s 2012 debut, Resolution – there is even a scene which is a direct crossover, (although that is perhaps just for fans to spot, as The Endless is entirely a stand-alone movie in itself).

Benson and Moorhead have always been impressive, holding down multi-tasking jobs as directors, screenwriters and film crew members, and this time they even manage to give confident performances as leads in capable ensemble cast.

Moorhead, who doubles as the cinematographer, succeeds in elevating their films above their modest budgets. Here, low-cost effects are used to enhance the visuals - bizarre events, odd behaviour, and cryptic motifs and symbols serve to convey the sense of an unsettling menace within a dull, dusty, rural landscape. Benson’s writing is sharp, witty and tense when it has to be, encouraging the viewer to interpret and theorise from the clues before a reveal is forthcoming.

Benson and Moorhead continue to generate a reputation for original and thought-provoking suspense movies. They avoid clichés while still delivering queasy anticipation and a sense of dread. The Endless is deadpan, severe, funny, frightening, but also surprising. It proves to be an enigmatic story steeped in symbolism – and it is also a satisfying sci-fi-horror flick, but unlike many of those, it is one that will keep you thinking long after you leave the cinema. I for one, cannot wait to see what they come up with next.