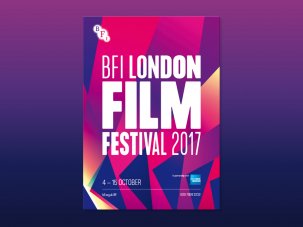 Susan Omand catches up with some of the short films which were shown recently at London Film Festival. Here is her selection of 5 films from the festival that were under 5 minutes long...

I am a huge fan of short films as you probably know. It always amazes and impresses me that a story can be told in such depth and detail in the space of 15-20 minutes. They are useful to both new and established film makers as a way of pushing boundaries into uncharted waters, sketching out new ideas for features or telling stories that maybe wouldn’t expand into a longer narrative without needing a big budget or long timescale.

But what about shorter short films? Those that are not much longer than the trailers of feature films? Mostly these appeal to my creative rather than narrative side as they are often very experimental, almost performance art or film installation pieces that would not look out of place in a gallery, that you don’t have to actually like to be able to appreciate, if you know what I mean. But sometimes you hit on absolute gems, so I set out on a mission to watch a random cross section of what was available at LFF at the shortest possible running lengths and found 5 very diverse films, in no particular order, all under 5 minutes long to show the broad range of what is currently out there. 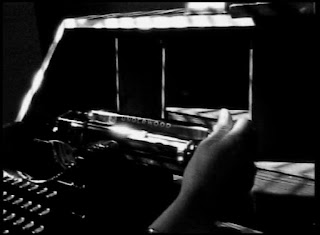 The shortest film on this year’s list at just over 3 minutes (including credits), this builds atmosphere using soundscaping, snippets of speech and mere seconds of grainy black and white film clips all collaged together. The buzz of electricity fades in and out throughout, overlaid with typewriting noises, and the speech, “46,” “1949,” “11,” “when you say you worked in film do you mean movies” etc, is echoed, cut and recut, building a tapestry of quiet over loud, left over right, repeated phrases. If you know the work of The Orb, think Little Fluffy Clouds without the music and you have the idea. This is exactly the kind of thing I was talking about above, an avant garde film work of art that builds a story in your head before explaining the story with captions at the end of the film, a true story of a death row prisoner called Willie Francis survived electrocution due to a faulty chair but the courts demanded that he be re-executed because he didn’t die the first time. 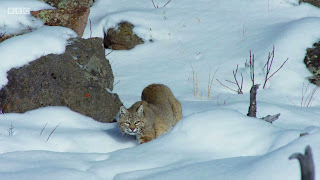 Ah this could have been so beautiful if it hadn’t tried to be clever. This short film didn’t work for me at all as the clips of the original superb nature documentary, which looks to have been done by the BBC, showing majestic snow covered mountains and the inhabiting eagles, snow cats and otters to a soundtrack of water flowing and indigenous people’s singing would have been amazing. However the film maker has decided to “create a monster” out of nature, making the film flash to the negative and back every half second or so making the screen go from normal colour film to reverse image black and white. The result, which I believe is what he hoped for, is incredibly disorientating and it felt almost like my heartbeat sped up to match the speed of the flash, it was nauseatingly uncomfortable and not in a good way.

From the ridiculous to the sublime and a joyful little animation aimed at very young viewers (yes, I realise I am not in that demographic, shut up) where an egret type bird with an upturned bill has to find a new animal to stand on when the buffalo he was using dies. The bird visits sheep, crows, penguins and a lion before finding his ideal new friend. The drawings are gorgeous and the story, which has no dialogue, is laugh out loud funny. It reminded me of these strange little eastern European cartoons, like Mole, that used to be on kids TV way back in the day. A storybook brought to life and I loved it. 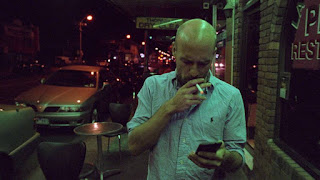 It’s telling that this short was part of the strand called My Loneliness is Killing Me at LFF. Beautifully shot and very well acted by John David Watton, this short is termed as “a field recording, dramatised” as we follow the man from dancing by himself in a club, cigarette and beer bottle in hand, on to a bus or train, sitting with three others who are all chatting. We see him walking alongside a girl earlier in the evening to staggering through an alleyway on his way home and you get the feeling that, even when he’s in a crowd, he’s on his own. That feeling of disconnect is heightened by the fact that the dialogue is, deliberately, not synched to the imagery and there are conversations over black screens as much as there are images with no speech. It’s very cleverly put together and left me feeling suitably melancholy with empathy. 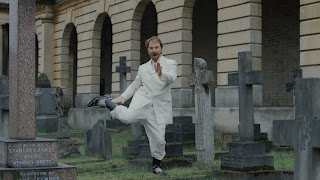 The Nightmare on Desk Teeth Street

Oh wow, have I left the best till last. This is a work of complete genius by director Dylan Holmes Williams and writer Robbie Macinnes and absolutely must be made into a TV series immediately. And I demand this after only 3 minutes viewing time. What’s so good about it? Everything! The concept for a start. Someone has stolen Harold Miller’s shiny blood red cowboy boots and replaced them with wooden clogs, so the boot-obsessed Harold goes out into the West London streets in his dressing gown, getting into a taxi which he asks to drive slowly so he can stare at people’s feet to try and find his boots again. I know, right?  I immediately bought into the characters, both Harold, played to his fullest by Simon Kane, and “The Secret Man,” who is also the voice-over narrator of the piece, flawlessly played by the always wonderful Guy Henry. The writing is completely surreal, as sharp and on point as the acting is, and the cinematography and set design is perfect. It just all clicks into place, ticks so many boxes for me and shows what you can do with a short short film. I really hope it is made publicly available, and expanded upon, very soon.