Film - Guardians of the Galaxy 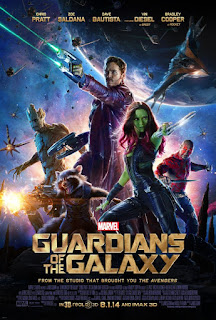 All heroes start somewhere as Kraig Taylor-Bryant looks back at the original Guardians of the Galaxy film. You're welcome...

Well now that we’re onto the second article of the set for Infinity War, it’s time to review one of my personal favourite of the Disney Marvel characters or should I say character teams…

Anyway, here is a summary of the first film from IMDb in case you are unaware of the plot:

“A group of intergalactic criminals are forced to work together to stop a fanatical warrior from taking control of the universe.”

This film not only brings an unlikely family together on-screen, but brings members of families of our everyday lives together through a film that is both comical and full of action to satisfy all members of the family. Even the music can appeal to the unhumorous old folk who were big fans of the 70s hits.

What I loved most about the music though was that, despite the fact that a lot of the people that watched the film hadn’t heard the 70s hits as they weren’t around then, people seemed to still appreciate the music and even enjoy it. I can’t say that about every old song I’ve heard (and definitely not every old film) but this is definitely an exception.

Strangely enough, this is another film [Read Kraig’s review of The Circle] that features Karen Gillan, I honestly don’t have any idea why (this is purely a coincidence I swear). But the character she plays in this film is incredible. The fact that we first see her as a psychopathic cyborg-like woman means, even when she is serious, it still seems to be funny when she gets shot in the face by a rocket fired by Drax (played by Dave Bautista). It's serious characters like her though that create a brilliant comical effect when mixed with characters that have their own slight comical element to them.

So the main character, of course, is Peter Quill (played by Chris Pratt) and, from the start of the film, just after he reveals his face and you hear the music, you realise that this film is not what you expected. This is what makes this film better its sequel from my perspective, by the second one you know what you’re in for. But in the first one, it’s almost as if it’s Peter/Chris that introduces us to this new aspect to the Disney Marvel Universe, the more comical and ridiculous side. Of course you get the occasional one liner, at least one, in your usual Disney Marvel film but with this one it’s as if the whole film is a joke, and we don’t mind.

The mix between Peter Quill and Gamora, an assassin, is equally both intriguing and ridiculous and that’s what keeps us invested in her, as well as the fact that she is the one that truly makes the action scenes fit together nicely. Of course, since we’ve seen that Drax takes the less methodical approach in combat, Gamora seems to be the more methodical and grown up, making us almost see her as Quill’s and Rocket’s mother, which makes it even more hilarious that Peter thinks she is a perfect match for him. It's aspects such as these that truly make her an important character. 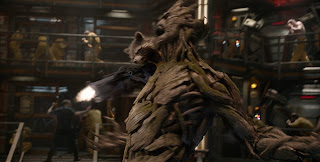 You could say that Rocket and Groot come as a pair. Simply by describing the two, they sound hilarious, it’s a talking tree and a “talking racoon” to quote Peter, and that’s what make them appeal to older audiences. Well what makes them appeal to younger audiences you may ask? Well, to be honest, not only does the concept of Groot in itself interest kids but he also sets a good example for them as he often conveys his affection for other life forms, such as when he gives a flower to a young girl in Port No-where. It’s at that point that the younger audience can truly feel a connection between the Guardians, and themselves. And of course the appearance of Rocket may also be appealing to kids, but I wouldn’t exactly call him a good influence!

And of course simply the concept of Port No-where is ridiculous and funny in itself, as the phrase “in the middle of no-where” came to mind when I first saw this film, and that in itself is ironic in this setting, as No-where appears to be an actual place. So, even through locations, the concept of this film is well thought out and links in perfectly with the atmosphere that it’s trying to create, with “serious” planets such as Xander and the homeworld of Ronan, the villain of the film, balancing out the film so that the action and the seriousness are both still there and neither is entirely overused.

And of course the effects need to be mentioned. There are many lengths that this film goes to ensure that we are not disappointed with them from the Ravager ships battling Ronan’s armada to Rocket crashing his ship through Ronan’s leading ship, causing structures to collapse, and frankly, jaws to drop at that moment I first saw it. It was almost like I was seeing everything I wanted Star Wars to be, but at the same time I was glad it wasn’t as of course, it’s good to have something that people who are fans of one franchise, can be fans of another thanks to the similarities between the two.

And ** SPOILER ** the fact that Michael Rooker's character, Yondo, turns out to be a caring step-father, as we come to realise after watching the second Guardians of the Galaxy film, we start to see this film in a whole different way, and that’s what can be clever about sequels, they can change the way you look back at its predecessors, either in a good or a bad way. As with Star Wars, the famous “I am your father” line changed the entire saga for its fans and made the film released before it seem different in many ways, as you may see certain characters differently, you could even, from then, see Obi Wan as a liar and not want to hear his name from that point on. And you can get a feeling like this from characters in Guardians of the Galaxy, but of course the lie told by Yondo in this first film, was to protect Quill and, instead of this making us hate the character, it makes us respect him further, especially those that view the film as a father themselves.

To conclude though, I think that the Guardians of the Galaxy crew will survive Infinity War. As for some of the other characters such as Tony Stark and Captain America, I wouldn’t be quite so sure about such an idea. But of course only time will tell. I do hope that the comedy comes with them on their transition into Infinity War whilst, at the same time, keeping up with the dark events that will unfold in the final stage of many of the Disney Marvel superhero characters.