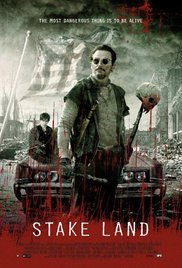 It's DAY 1 of David Ames' Vampire themed Hallow-vent Calendar as he counts the days until our favourite spooky celebration of the year - HALLOWE'EN! Behind today's window is Stake Land...

Over the years, there have been hundreds of vampire films made, most of which all have gone straight to video. This has never deterred me from watching a film of this genre so when I logged onto Netflix this year, I searched for Vampire and immediately came across 2010’s Stake Land.

As somewhat low budget horror movies go, I was thoroughly impressed with the look and feel of Stake Land. The story begins after a pandemic of Vampirism hits humanity and causes those remaining to flee and hide. The first scene shows a young man watching his family get slaughtered by a beast before a mysterious hunter, Mister, appears and saves the day, eventually taking the boy, Martin, under his wing.

As the film progresses, we are treated to scenery that brings to mind elements of The Road and Zombieland. The pair make their way across the country, hoping eventually to make it to New Eden, a supposedly safe town north of the border. Throughout this landscape the two encounter a nun and save her from two thugs who, as it is revealed later, are members of The Brotherhood, a cult that interprets the pandemic as God’s will done on Earth.

The movie follows these characters as they struggle to battle both the undead and their vampire-worshipping, human counterparts in The Brotherhood. The entire film has a strangely endearing Father-Son storyline between Mister and Martin, as well as a love story between another found woman, young Belle, who is pregnant.

I don’t want to give away too much about the film but I will say that I enjoyed it quite a bit. The vampires are very unorthodox, resembling more the Uruk-Hai from The Lord of the Rings than classic vampires. Still, they are creepy and the gore that is present is well-executed considering the budget of the film.

All of the performances are pretty good as well. Nick Damici plays Mister with a wonderful Clint Eastwood-in-Million Dollar Baby-vibe, being both cold and fatherly at the same time. Connor Paolo portrays both weakness, meekness, and eventual strength as Martin as well. Kelly McGillis (from Top Gun!) plays the nun with appropriate manner and civility. Michael Cerveris really drives home the movie with his portrayal of Jebedia Loven, the leader of the Brotherhood, who is both fanatical and terrifying in the best possible way. The last major player is the classic horror actress Danielle Harris (who is evidently perpetually 23 and still unbelievably gorgeous). She plays the pregnant Belle and delivers the best performance of the film, as she has always played vulnerable, yet strong, very well.

This film is definitely worth a watch. It isn’t complicated, difficult to follow, or preachy. It is simply a fun, post-apocalyptic trip through an America populated by Vampires and cults. Check it out this year!