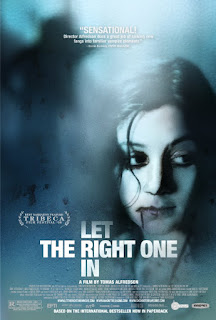 It's DAY 12 of David Ames' Vampire themed Hallow-vent Calendar as he counts the days until our favourite spooky celebration of the year - HALLOWE'EN! Behind today's window is the Swedish film adaptation of Let the Right One In...

Now that we have talked about the novel, I wanted to take another stab at the Swedish film version of Lindquist’s Let the Right One In. I won’t go into detail about the plot as that was explained yesterday. Instead I want to focus on what, for my money, is the greatest vampire film ever made.

At the helm of this 2008 masterpiece is Tomas Alfredson (Atomic Blonde, Tinker Tailor Soldier Spy). He hand is so deft that we are treated to a weirdly accurate portrayal of the novel, albeit with much, MUCH less of the pedophile aspect in the book. The major twist about Eli is still accurate, although downplayed, and his work with Hoyte van Hoytema on the cinematography is beautiful. The film has a wonderfully blue hue that seems to scream Swedish somehow. The music is understated and perfectly portrays the emotions warranted in each film. Johan Soderqvist knocks the score out of the park on multiple occasions.

Kare Hedebrant plays an emotionally unstable Oskar with gusto and reserve normally reserved for the likes of much alder actors. His ability to play with emotion and reaction creates an incredibly believable portrayal of a troubled youth and that performance drives the film forward. The scene where he forces Eli to enter his apartment without inviting her in gives us both a sadistic and shockingly touching turn in his performance. He is able to bring the needed emotional weight to Lindquist’s character design.

While all performances in the movie are good, the entire film is made by the earth-shattering portrayal of Eli by Lina Leandersson. She is dark and sad and intimidating all at the same time. Her vulnerability comes through in waves and while she is incredibly unsettling, her performance endears her to us as the actual hero of the film. Even covered in blood, she is incredibly sympathetic in a way that makes those paternal instincts awake and cause you to simply want to hold her and tell her everything will be okay.

One scene needs to be discussed here, and that is the infamous pool scene at the very end of the film. As Oskar is being drowned, something is happening. Alfredson makes the genius choice to keep all of the action above the water while we are kept below so as to only see Oskar’s reaction. There is blood, severed limbs and a head, and an amazing set of kicking legs. I don’t want to give away exactly what happens but, like the book, even amid the slaughter the movie hits weirdly emotional notes that make the scene more endearing than terrifying.

If you have not seen this work, do yourself a favor and find it right now. As I said before, this is easily my favorite vampire film of all time, and honestly it probably makes my top ten in terms of movies as a whole. It is touching, brutal, and above all else, it feels strangely human in a way that realistic movies struggle to accomplish. This is a must see for anyone who likes the genre but honestly it’s a must see for anyone in general.

Also, as a side-note, do not watch this with the English dub as it is terrible. Instead, watch with the original Swedish dialogue and English subtitles. You will thank me later.