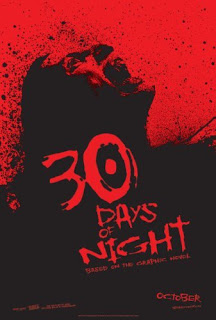 It's DAY 18 of David Ames' Vampire themed Hallow-vent Calendar as he counts the days until our favourite spooky celebration of the year - HALLOWE'EN! Behind today's window is the film adaptation of 30 Days of Night...

As with any type of adaptation, there are always changes done to the source material. Many times, those changes seem to ruin the work but I can’ say that is the case with today’s film. While there are small plot shifts, the destruction of an entire subplot, and the combining of certain main characters, the film still seems to hold together remarkably well and it really captures the vibe of the original work. Today, we are looking at 2007’s film adaption of 30 Days of Night.

If you read the review yesterday, you would have seen that the comic is and will always be one of my favorite series of all time. The writing and artwork are spot on and they really capture the vampire genre in a new and refreshing light, considering the onset of teenage romance vampires. The film goes so far as to adapt that same feeling and really drive home the gory, macabre feeling found in the book. To accomplish this, the screenplay was written by Stuart Beattie and Brian Nelson but also by Steve Niles, the author of the original work. His touch can be seen all over the screen.

Just like the book, the movie begins with a stranger coming into Barrow, Alaska, on the last day before the sun will set for a month. Along with this appearance, strange things begin to happen. We are told that there is no ingress or egress into town while the 30-day night is happening, as the only way to access the town is by plane. Throughout town, Sherriff Eben Oleson is dealing with a lot of strange occurrences: all of the town’s cellphones have been burned, all of the sled dogs in town have been slaughtered, and the town’s only helicopter has been gutted. At the same time, Eben’s estranged wife, Stella becomes stranded in town when her car is destroyed in an accident.

As Eben deals with the stranger who is causing trouble at the local diner, people around town begin to be slaughtered by a horde of vampires who descend on the town. Next the cell and internet go down and as night falls, strange people are seen approaching the town and within hours the small community is completely under siege. As Eben, Stella, and a few other townspeople hide out in certain places in town, the vampires gorge themselves and relish in a place with no sun. As the time nears an end, the vampires must seek out the remaining few survivors and wipe them out in order to maintain their secrecy. Only Eben, with an insane plan, can stop them and save the last few remaining members of the Barrow community before the sun finally rises.

First, we have to talk about the wonderful direction of David Slade. His use of night shoots and camera manipulation, along with cinematographer Jo Willems, crates a perfect scene for this film. By adding a slightly bluish hue to everything on screen, the film begins to really resemble the source material and Slade goes so far as to recreate some of the images from the graphic novel directly on the screen. Also, in a stroke of genius, the vampire’s eyes were digitally altered to be just slightly tilted so that they look just barely inhuman; it is a brilliant way to create subtle differences between predator and prey.

Performances are wonderful as well. Josh Hartnett plays an amazingly strong, yet vulnerable Eben Oleson. He pulls of the downtrodden, crossed husband while maintaining the strength a small town sheriff needs to feel authentic. Melissa George plays his wife, Stella, with just as much success, and with their interactions we are treated to much more than just a horror movie. We also get to see a relationship that seems to have ended while neither party really understands why, although Stella seems to have been at the forefront of that decision. The head vampire is portrayed by Danny Huston with such terrifying intenseness that he steals every scene he is a part of. Huston is so incredibly creepy and the way in which the vampires communicate, a series of guttural inhales and clicks mixed with what sounds like deranged Klingon spliced with Inuit, creates an uncomfortable series of scenes and helps to increase the horror element of the vampires.

Lastly, Ben Foster gets a separate paragraph because he is one of my favorite actors and just like almost every movie he is in, he steals the scene. He plays the stranger, and utilizing a weird, high-pitched, almost creole accent, really drives home the creepy. Still, at a certain point in the film, you can’t help but feel that he has been used and that he is so very alone. Foster’s entire career has been made on his ability to be so crazy intense as to warrant all attention (Hostage, 3:10 to Yuma, Pandorum, Alpha Dog, etc.). He also has my favorite line from the entire film. With his jail cell backlighting his frame and the rest of the station in darkness, he says, “Check on Gus. Board the windows. Try to hide. They're coming. This time they're gonna take me with them.” It is simply great.

If you haven’t seen this film, it is definitely worth a watch. I forgot how unbelievably gory certain parts of this movie are and with some great kill scenes and some amazing overhead shots of bright blood splattered onto very white snow, the scene is really set. If you are at all a fan of vampires, this film is for you. Dive in and enjoy a little return to monstrous vampires who kill and eat everything in their path. It’s like going home.