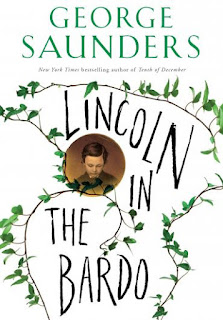 The 58-year-old New York resident, born in Texas, is the second American author to win the prize in its 49-year history. He was in contention for the prize with two British, one British-Pakistani and two American writers.

Lola, Baroness Young, 2017 Chair of judges, said ‘The form and style of this utterly original novel, reveals a witty, intelligent, and deeply moving narrative. This tale of the haunting and haunted souls in the afterlife of Abraham Lincoln’s young son paradoxically creates a vivid and lively evocation of the characters that populate this other world. Lincoln in the Bardo is both rooted in, and plays with history, and explores the meaning and experience of empathy.’

Lincoln in the Bardo focuses on a single night in the life of Abraham Lincoln: an actual moment in 1862 when the body of his 11-year-old son was laid to rest in a Washington cemetery. Saunders told TIME magazine that he didn’t really want to write about Lincoln, ‘but was so captivated by this story I'd heard years ago about him entering his son's crypt. I thought of the book as a way of trying to instil the same reaction I'd had all those years ago.’

Lincoln in the Bardo is published by Bloomsbury, making it the third consecutive year the prize has been won by an independent publisher, following Oneworld Publications’ success in 2015 with Marlon James and 2016 with Paul Beatty. Bloomsbury has won the prize three times before, with Howard Jacobson (2010), Margaret Atwood (2000) and Michael Ondaatje (1992).

Saunders’ win comes in the month that 1989 Booker Prize-winning author Kazuo Ishiguro was named as this year’s Nobel Prize in Literature recipient. Ishiguro follows in the footsteps of other Booker Prize-recognised authors who have gone on to win the award including: V. S. Naipaul, Nadine Gordimer, William Golding, J. M. Coetzee and Doris Lessing. Saunders was presented with a trophy from HRH The Duchess of Cornwall and a £50,000 cheque by Luke Ellis, Chief Executive of Man Group. Saunders also receives a designer bound edition of his book and a further £2,500 for being shortlisted.

First awarded in 1969, the Man Booker Prize is recognised as the leading award for high quality literary fiction written in English.The rules of the prize were changed at the end of 2013 to embrace the English language ‘in all its vigour, its vitality, its versatility and its glory’, opening it up to writers beyond the UK and Commonwealth when their novels are published in UK. The list of winners includes many of the giants of the last four decades, from Salman Rushdie to Margaret Atwood, Iris Murdoch to JM Coetzee. The prize has also recognised many authors early in their careers, including Eleanor Catton, Aravind Adiga and Ben Okri. Other recent winners have included Hilary Mantel (2012 and 2009), whose Wolf Hall and Bring Up the Bodies have led to award-winning adaptations on stage and screen, Julian Barnes (2011), whose The Sense of an Ending was released as a film this year and Marlon James’ A Brief History of Seven Killings (2015), which has been optioned for a TV series by HBO. Further winning novels that have gone on to have second or third lives on stage, screen and radio include Midnight’s Children, Schindler’s Ark (directed by Steven Spielberg as Schindler’s List), The Remains of the Day and The English Patient.

Man Group, an active investment management firm, has sponsored the prize since 2002. Luke Ellis, CEO of Man Group, said, ‘We are pleased to congratulate George Saunders, along with each of the shortlisted authors, for his fantastic achievement this year. At Man Group, we are extremely proud to be sponsoring the world’s foremost literary prize and celebrating exceptional literary talent for a fifteenth year. We understand the importance of intellectual capital and creative thought – and indeed, the ability to view the world from different lenses matters more than ever today, in this age of rapid and inexorable change. We also believe that businesses like ours have an important duty to advance progress in education at every level: from prizes like this, which recognise global talent, to the local grassroots initiatives championed by the Booker Prize Foundation and the Man Charitable Trust, which we are honoured to support.’

About the Winning Book

On 22 February 1862, two days after his death, Willie Lincoln is laid to rest in a marble crypt in a Georgetown cemetery. That very night, shattered by grief, his father Abraham arrives at the cemetery, alone, under cover of darkness.

Over the course of that evening, Abraham Lincoln paces the graveyard unsettled by the death of his beloved boy, and by the grim shadow of a war that feels as though it is without end. Meanwhile Willie is trapped in a state of limbo between the dead and the living – drawn to his father with whom he can no longer communicate, existing in a ghostly world populated by the recently passed and the long dead.

Unfolding in the graveyard over a single night, narrated by a dazzling chorus of voices, Lincoln in the Bardo is a thrilling exploration of death, grief and the deeper meaning and possibilities of life.

George Saunders was born in 1958 and is the author of nine books, including Tenth of December, which was a finalist for the National Book Award and won the inaugural Folio Prize (for the best work of fiction in English) and the Story Prize (best short-story collection). He has received MacArthur and Guggenheim fellowships and the PEN/Malamud Prize for excellence in the short story, and was recently elected to the American Academy of Arts and Sciences. In 2013, he was named one of the world’s 100 most influential people by Time magazine. He teaches in the creative writing program at Syracuse University.