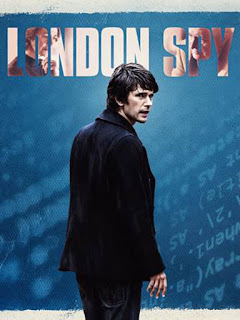 In a series of articles, Susan Omand and Steve Taylor-Bryant are going to remember the policemen, spies and criminal specialists that entertained them over the years. This time Steve heads for the capital with London Spy...

A young hedonistic man named Danny (Ben Whishaw) is unhappy with his life of drink and drugs and sexual hook ups but can't find his way out until a chance meeting with 'investment banker' Alex (Edward Holcroft), really an operative for the Secret Intelligence Service, leads to true love. But Danny's happiness is shattered when he finds Alex murdered and stuffed in a trunk in a hidden sado-masochistic room in Alex's loft. Danny wants answers, despite being a suspect himself and, as the story goes on, Danny finds he didn't really know Alex at all and unseen forces don't want him stumbling on the truth.

London Spy was superb in both story structure and casting. The meeting of potential partners from two different worlds is an age old tale but is played out in Tom Rob Smith's impeccable drama in a way that feels fresh and new. The cast, from the ever reliable Jim Broadbent to Adrian Lester, from Ricardo Scimarcio to the elegance of Charlotte Rampling, all highly watchable in their own unique way, complement the brilliance of Whishaw and Holcroft in a such a manner that you wish, come the end, that every show you watched was made of this particular cast. Dramatic visuals and a London backdrop filmed in very cinematic style from director Jakob Verbruggen lends to the imagination, letting what's happening on the screen seep into your mind until you are as agitated and as confused as Danny. And that is when the fun begins. This isn't your usual spy story, with the protagonists performing how they usually do, this is a tense and scary position that drives not only the narrative on screen but your heart rate along with it. I binged all five episodes in one day back to back and I was emotionally drained when it finished.

London Spy is so much more than its title will have you believe. Verging on psychological horror and paranoia more than traditional espionage tropes, the show is a slow burn and builds to a tense finale in a style that is unusual for a British show these days and the all star cast brings the fascinating story to life in a visually arresting way.