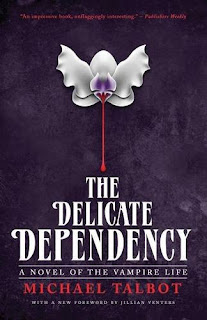 It's DAY 20 of David Ames' Vampire themed Hallow-vent Calendar as he counts the days until our favourite spooky celebration of the year - HALLOWE'EN! Behind today's window is The Delicate Dependency...

This year I have really enjoyed studying my favorite subgenre of horror: the vampires. I have been reading books, comics, watching television shows and anime, and of course indulging in many a vampire movie. While pouring over my bookshelf for vampire themed works to review this year, I stumbled across an old, battered paperback that had, for some reason neglected to mention so far this year. This book, with a withered, stale purple cover is Michael Talbot’s genre defining masterpiece, The Delicate Dependency.

This novel was released in 1982 and had a brief run before going out of print. Afterward, copies were incredibly hard to come by, some going for over $100. I was lucky enough to come across one in the back of a used book store in Columbus and I am so very thankful for that. Talbot’s writing style is beautiful; a strange mix of Anne Rice and Bram Stoker but with his very own little flavor. His prose reads almost like poetry, with a classic gothic, romantic elegance that is near impossible to find in modern (or at least almost modern) writing.

The Delicate Dependency: A Novel of the Vampire Life follows the life and times of Victorian Dr. John Gladstone who, after suffering the loss of his wife to influenza, is now obsessed with studying the disease. He has two daughters, the older, darker Ursula, and the young, blind Camille. One evening he crosses paths with an incredibly beautiful young man, Mr. Niccolo Cavalanti and after inviting the stranger to stay with him, Gladstone begins to notice strange things about his new house guest: he cannot stand the daylight, he never eats or drinks, he has superhuman speed and strength, and fangs.

Once this new discovery is made, Gladstone discusses this with Niccolo at great length and we are treated to a wonderfully different style of vampire tale. Suddenly, and without any warning, Niccolo absconds with Camille and Gladstone and Ursula set out to track down the vampire and their missing kin. Ursula is transfixed by the darkness that is vampirism but Gladstone harbors an unease toward them. When they finally track down the missing Niccolo, the ending is more amazing and out of the blue than you can possibly imagine.

I refuse to give away any more but I can say that this book is singlehandedly one of the greatest vampire novels ever written. It deserves to be mentioned in the same breath with Dracula, Interview with the Vampire, Let the Right One In, and other works of the like. Its breadth in discussing the life and operation of vampires and their cultures alone make Talbot a revolutionary writer in the genre. Sadly, his death in 1992 quells any chance of another work in this universe but modern vampire writers could take a page from Talbot in how they structure elements of their novels.

Although for years this book was the holy grail of vampire books, we are lucky enough that in 2014, Valancourt Books republished the work with a sexy new cover and offered it back out to the masses. If you are a fan of gothic tales, horror stories, or simply anything related to Vampires, you need to pick this novel up immediately. There is nothing really like it out there right now and it has easily earned its cult following. Once you start reading, you won’t put it down until you join that following. It is just that good.