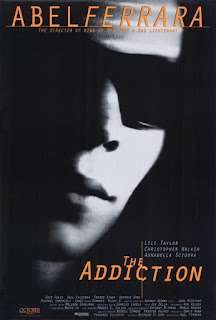 It's DAY 21 of David Ames' Vampire themed Hallow-vent Calendar as he counts the days until our favourite spooky celebration of the year - HALLOWE'EN! Behind today's window is The Addiction...

In the realm of metaphor and allegory, vampires are almost always a reference to sex and power. There is penetration, exchange of fluids, shifting sexualities – all of these aspects make vampires simply sex personified. There are very few instances where this is not the case. Today, on a whim, I finally sat down and watched a film that I had heard so much about while studying film at College. It is full of subtext and metaphor and utilizes the vampire genre in a way not normally seen. This film is Abel Ferrara’s 1995 arthouse cult classic The Addiction.

The Addiction follows Kathleen, an overworked, bookworm graduate student who is studying philosophy at New York University. One evening, while walking home, she encounters a beautiful woman named Casanova who spouts bits of philosophical nonsense to her before asking her to “order [her] to go away.” When Kathleen cannot, Casanova bites into Kathleen’s neck and drains her of blood. As the film progresses, we see Kathleen go through normal vampiric changes: she has an aversion to light, she has an insatiable hunger, and she can no longer eat regular food.

Her friend Jean worries about the changes she sees in Kathleen. Kathleen looks like a drug addict (common on the streets of New York), constantly rambling on incoherently about her “disease” in philosophical terms. She attacks many people including Jean before encountering a tall, mysterious man named Peina who thwarts her attack. Peina waxes poetic about what it is to be alive and to be dead, what it is to be a monster and a vampire. He feeds on Kathleen before leaving her, telling her that she knows nothing. Eventually, after feeding once more, she finally understands who she is and in what is probably one of the most fucked up of scenes this year, hosts a Post PhD graduation party in which she and her newly minted coven of vampires feasts brutally on a large group of people. The ending is great and that is where I want to leave this review as I want you to discover this little gem on your own.

Lili Taylor has a breakout performance in this film, really carrying the rest of the cast with her as she undergoes a strange, unbelievable transformation of character, similar to Isabelle Adjani’s trademark role in 1981’s Possession. Her shift from shy, sheltered college student to blood thirsty, heartless monster, to redemptive middle-ground is incredible. Other characters are okay in the film, especially the beautiful Annabelle Sciorra as Casanova. Also, in a weirdly surprising yet happy twist, Christopher Walken shows up out of the blue as Peina. As is usual, his charisma works on multiple levels.

The film is shot in black and white and utilizes a myriad of techniques that help to further both the mystery and the darkness inherent in the film. Ferrara splices in clips and pictures of atrocities and genocides around the world, especially that of the My Lai massacre to help add poignancy and importance to certain scenes as well.

What this film really does well is push the allegory of not only drug addiction but also, and more importantly, the connection of sin to humanity. It looks at human beings and their internal ties to and need for sin. Only a missionary and a priest can ward off the vampire and it isn’t until she reaches her lowest point and finally asks God for help that she seems to recover part of herself. This piece of art is heralded as a philosophical masterpiece and my professors in college were all about what it had to say. Personally, I found it quite pretentious although I did greatly enjoy it. The philosophers mentioned are all sort of glossed over and none are truly explored at length; the film ends up “sounding” deep when really it seems as though it may have been written by an undergrad with one philosophy class under his belt.

You need to check this out. The negative things I’ve mentioned are barely an issue and the work itself deserves to be seen. It was somewhat of a hidden secret for me and I am so glad that I rediscovered it this October.