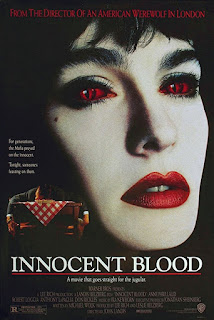 It's DAY 22 of David Ames' Vampire themed Hallow-vent Calendar as he counts the days until our favourite spooky celebration of the year - HALLOWE'EN! Behind today's window is Innocent Blood...

As we have already established multiple times this year, there are few things holding back my love of 80s horror movies, especially when they deal with Vampires. Luckily, today’s movie is no different. It has all of those great 80s tropes: slapstick comedy randomly inserted, needless nudity and sex scenes, and hilariously poor acting in certain areas. All of that combined with a halfway decent plotline gives us today’s film: John Landis’ 1982 Crime Comedy Horror (yes, all of those descriptors apply here) film Innocent Blood.

Innocent Blood follows Marie, a transplanted French vampire in Pittsburg, who has accepted her vampirism and its unceasing thirst for both sex and blood and has decided to feed only on criminals. She feeds next on a Mafioso lieutenant and then blows his head clean off with a shotgun to stop the transformation. At the same time, undercover detective Joseph Gennaro is in deep with the mob, especially the boss Sal Macelli, and when his cover is blown, he is placed under protective custody. The next evening, Marie tries to feed on Sal and does so but fails to kill him and in her fleeing from the scene, attracts Gennaro who follows her.

They spark up a somewhat tempestuous relationship, spurred on by both of their desires to see Sal captured/killed. When Sal comes back to life and flees the morgue, he travels among his group of confidants killing and turning them all. Meanwhile, in an incredibly 80s sense of romance, Marie and Gennaro hole up in a hotel until sundown and have sex. I won’t spoil the strangely awesome ending of this movie for you. Just know that it is fun and gory and everything an 80s horror movie should be.

At its core this movie tries to merge a classic mob/detective movie with a vampire flick and it does so remarkably well. It may just be my forgiving nature or irrational love of all things vampire, but I truly enjoy what this movie does. There is a great mix of comedy and sex and horror elements and Landis is able to balance them all pretty well.

The practical effects are surprisingly great, especially when Don Rickles’ character bursts into flames after first turning into glorified human charcoal. The wounds and the makeup, especially on newly turned Sal, are also very well done. My favorite thing about the movie’s effects is easily the weird, illuminated eyes that all of the vampires seem to possess. They are entertaining and also, weirdly unsettling.

Performance-wise, everyone does well. Anthony LaPaglia is believable, yet over-the-top, in a trademark 80s style as Gennaro. His acting is just what it should be. Don Rickles is fun as per usual, playing a slimy lawyer who lives to defend Macelli. As I said before, his death is probably the best scene in the film as a whole. Robert Loggia is divine as Sal Macelli. He is intimidating and scary and still funny and charismatic. He truly becomes the mob boss he is supposed to be and makes a genuine villain out of a normally clichéd character trope. Sadly, the worst performance is from the beautiful Anne Parillaud playing Marie. She actually isn’t that bad, although when she gets upset or screams at someone, her accent makes her delivery incredibly flat. She is still a great vampire and goes down in my book as one of the sexiest in film history.

At the end of the day, this film is great for anyone who really enjoys crime or vampire films and if you like both, then you will love this. It isn’t without its flaws but it is strong with what it attempts and achieves. Check out this 80s classic and add yet another vampire film to that genre knowledge.