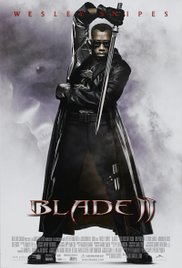 It's DAY 26 of David Ames' Vampire themed Hallow-vent Calendar as he counts the days until our favourite spooky celebration of the year - HALLOWE'EN! Behind today's window is Blade II...

In the 1990s Marvel studios was suffering great losses and was nearing bankruptcy so in an effort to salvage some money, they began to auction off the film rights to many of their properties. This led to 20th Century Fox purchasing the X-Men Franchise and Sony taking control of Spider-Man, as well as a few other changes. In this deal New Line Cinema purchased the rights to a, at least culturally unknown character who would later go down in history as one of the first major successes of comic to film adaptation: Blade. In 1998, New Line and Marvel released Blade and although it wasn’t received incredibly well by critics, the film garnered a cult following and became, for all intents and purposes, the first real Marvel movie. From four years later, with famed horror director Guillermo del Toro at the helm, the studio released its second in the franchise. This film, the stellar Blade II, is a horror-action masterpiece and what we are talking about today.

Blade II follows on the events of the first film, delving deeper in the vampire world and once again, showing how fearful the vamps are of their interracial, interspecies Daywalker hunter. While they are being hunted by Blade, there is a greater threat to the vampire species: the reaper virus. This disease causes vampires to mutate, their mouths and lower jaws splitting into a Venus fly trap-like maw filled with teeth and forcing them to feed on other vampires and humans. What makes them so powerful is that they become immune to all vampire weaknesses except sunlight and their hunger causes feeding frenzies. The vampires come to Blade for help, and even though he hates them, Blade agrees to help because the mutation and uncontrollable hunger makes the reapers a much more immediate threat to humanity. Also, it allows Blade basically unfettered access to knowledge of the inner workings of the vampire world.

A team of extremely skilled vampire fighters known as the Bloodpack join Blade in his search for the cause of the reaper virus and after many battles and chases, they are led back to one of the vampire elders whose son is responsible, not of his own doing. I don’t want to give too much away but know that this film is so much fun and the horror elements that are used in tandem with action movie tropes creates a very enjoyable experience.

This film is easily my favorite in the Blade franchise. Del Toro, as per usual, utilizes a great mix of computer generated and practical effects perfectly to create the reapers and their bloodlust. Visuals have always been his strength and, much like Pans Labyrinth, they play a key role in this film as well. The movie, while and action movie at its core, brings some serious horror elements to play, creating the perfect action-horror hybrid filled with mystery, great fight choreography, and scares.

Wesley Snipes returns as Blade and is once again incredible in his role. He takes the mantle of action hero from those older stars including Schwarzenegger and Stallone and runs with it, and this film showcases not only his incredibly physical prowess but also his sweet one-liner ability. Kris Kristofferson returns as Whistler, Blade’s father-figure and tech guru, whose transformation back into human is awesome. Also, we get to see him in a subplot, feeling as though he has been replaced by Norman Reedus, who plays Skud, Blade’s new weaponsmith. Reedus is funny and energetic a sthe young, potsmoking craftsman and brings a new and fun energy to the cast. All members of the Bloodpack bring their own strengths but the best performance out of them is probably Ron Pearlman as Dieter, the cocky and self-assured vampire who trusts Blade about as much as Blade trusts him.

If you haven’t seen this movie, you should do yourself a favor and what the first so you can enjoy this great addition to the vampire genre. It is genuinely creepy at points. The Reapers look awesome and the action mixed with the horror provides something that was sorely needed and would potentially help to launch both the Resident Evil and Underworld franchises into the action-horror subgenre.