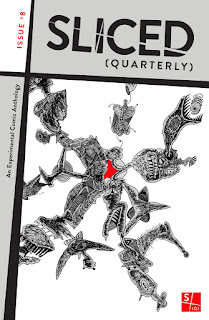 Sliced Quarterly is an experimental comic anthology. They aim to give a home to stories that want to push the boundaries of the comic book narrative and publish ‘slice of life’ stories told in extraordinary ways.

Issue #8 of Sliced Quarterly is continuing to showcase unique comics from fresh and distinct voices in the small press scene, not just in the UK, but from around the world.

This collection contains: A meta-comic about being in a comic, woes of a sales-person, a haunting Indian ritual, negative self-talk, a failing everday hero, a chilling parable and the oddest call centre in existence. There's also also have the second part of our serialised comic ‘Farquhar’. 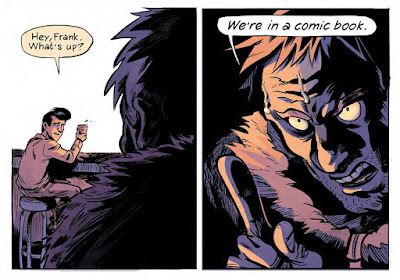 This completes the second publishing cycle for Sliced Quarterly and they are now looking at making their second print collection, which will hit Kickstarter in the next few months.

The first collected volume is now available to buy in print from their website - slicedquarterly.bigcartel.com

If you're looking for somewhere to submit that "strange little comic" you've created, Sliced Quarterly now operate an open submissions policy, guidelines are on the website -slicedquarterly.co.uk/submissions

Editor of Sliced Quarterly, Ken Reynolds currently lives and works in Ipswich along with his lovely (tolerant) wife and beautiful daughter. He has lettered for many independent publishers and creators, including upcoming work for Grayhaven Comics, Insane Comics & Arcana. He was proud to be part of the lettering team that completed the 750+ page epic that is ‘The Explorers’ Guild’ by Jon Baird, Kevin Costner and Rick Ross. He also writes the Kickstarter funded comic ‘Cognition’, a supernatural noir adventure story.

Sliced Quarterly #8 is now available to read and download for free at www.slicedquarterly.co.uk All the previous issues and specials are there to be enjoyed too!