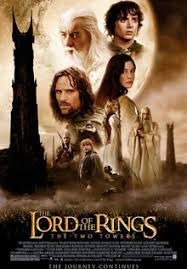 Our small band of Gunters here in The DreamCage universe are reviewing every film mentioned in Ernest Cline's Ready Player One. This week, Daniel White returns to The Lord of the Rings with The Two Towers ...


Read Daniel's review of the first Lord of the Rings film

When we left Middle Earth the Fellowship had failed and Boromir was dead, so was Gandalf The Grey and Pippin and Merry had been abducted by Orcs (try clapping your hands and chanting "they're taking the hobbits to Isengaard"- well it amuses me) So now begins the adaptation of book two and will it prove to be the difficult second album that everyone thought it would be?

Short answer is no, with the long one being no. no very no. With a brief "previously on MiddleEarth montage" at the beginning, the action continues exactly where it left off with Sam and Frodo complaining about Mordor's inclement weather and Gimli complaining about his hurty feet. I am still completely bewitched by New Zealand's sweeping landscapes and majestic mountainous er bits and the cinematography throughout all three films is stunning. Typically, the second film is known for two things. the epic Battle of Helm's Deep and the walking talking Tree things (Ents) Jackson needed to get this one right as the scale of the legions of Orcs assailing Helm's Deep needed to be nothing short of epic. Any mistakes with the Ents would also lead to embarrassment with the walking Twiglets (other walking edible snacks are available) not looking remotely able to bring down Christopher Lee's Isengaard fortress. Having built an incredibly strong character base with the astonishing performances in Fellowship I really didn't understand where the negativity over the second outing came from. Jackson is a fan first and foremost and he wasn't going mess this one up, he WAS always going to mess up The Hobbit's films but that's for another article. (which won't be written by me because I really don't care enough)

All of the key points in Tolkien's book are brought to screen exactly as they should be and again the performances that Jackson inspires from his cast are completely delicious. Brad Dourf is suitably slimy and Dourfesque as Wormtongue and Bernard Hill is wondrously Shakespearean as King Theoden. I really love the scenes where Eowyn goes all doe eyed over the Middle Earth hunkishness of Vigo and then I snigger as she realises he only has eyes for the pointy eared Elfish beauty that is Liv Tyler. Two Towers is the film where the brilliance of Andy Serkis' performance as Gollum bursts forth with his staggering portrayal of the sad creatures split character, one of the stand out moments for me. Gollum is the linch pin in the whole trilogy and Serkis perfectly captures his dual nature as both a figure of pity but who is also capable of unspeakable acts in his lust for the Ring. The danger with Two Towers would be for the audience to feel dragged around Middle Earth and not settling. With three groups (Theoden's Rohan fight for survival, Sam, Frodo and Gollum's journey to Mordor and Pippin, Merry's interaction with the Ents) furthering plot developments simultaneously this would be the point where a lesser Director would lose control. But Jackson is a genius and he expertly shifts between the parties whilst still keeping the audience engaged with the characters. The relationship between the main characters is actually intensified not lessened, with the division and by the time we arrive at Helm's Deep the rapport and 'banter' between Legolas and Gimli is just a lot of fun!

Ahhhhh Helm's Deep and at the point where I must go ashamedly geeky, the standout performance for this element goes to Massive Software and not the actors themselves. To show the sheer scale of the Orc force that has been created to breach Helm's Deep Massive Software developed new AI technology. As the two armies clash it is impossible to see where real actors make way for computer generated artistry, even now it is an achievement that is simply breathtaking both in scale and rendering. It is hard to see even with further technological advancement that these battles sequences could ever be surpassed. Jackson has again delivered the scenes that I had imagined from reading exactly as they played out all those years ago. With the distruction of Orc Central, Jackson also delivers Entish vengeance in the way that feels believable and the moment where Treebeard discovers Saruman's treachory becomes the turning point in Middle Earth's fortunes. When you add in another musical masterpiece from Howard Shore, Lord Of The Rings; The Two Towers is a triumph that delivers exactly what a middle instalment in a trilogy needs to. Peter Jackson is surely destined to become One Director To Rule Them All, (cough King Kong cough cough)

Next time on Middle Earth: Frodo's constipated look and the film that just won't end.